The Friends of Eddie Coyle (The Criterion Collection) 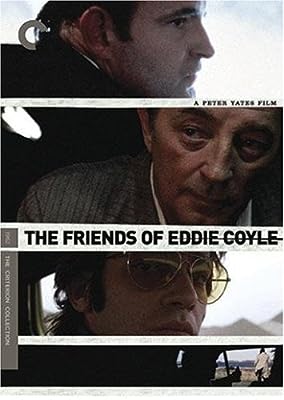 Price: $44.71
As of 2022-10-05 01:18:48 UTC (more info)
Product prices and availability are accurate as of 2022-10-05 01:18:48 UTC and are subject to change. Any price and availability information displayed on http://www.amazon.com/ at the time of purchase will apply to the purchase of this product.
Availability: Not Available - stock arriving soon
Buy Now from Amazon
Product Information (more info)
CERTAIN CONTENT THAT APPEARS ON THIS SITE COMES FROM AMAZON SERVICES LLC. THIS CONTENT IS PROVIDED 'AS IS' AND IS SUBJECT TO CHANGE OR REMOVAL AT ANY TIME.

In one of the best performances of his legendary career; Robert Mitchum plays small-time gunrunner Eddie "Fingers" Coyle in Peter Yates's adaptation of George V. Higgins's acclaimed novel The Friends of Eddie Coyle. World-weary and living hand to mouth; Coyle works on the sidelines of the seedy Boston underworld just to make ends meet. But when he finds himself facing a second stretch of hard time; he's forced to weigh loyalty to his criminal colleagues against snitching to stay free. Directed with a sharp eye for its gritty locales and an open heart for its less-than-heroic characters; this is one of the true treasures of 1970s Hollywood filmmakin--a suspenseful crime drama in stark; unforgiving daylight.