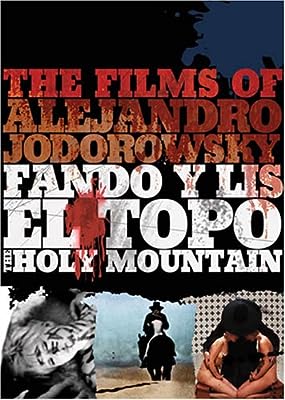 Price: $49.98
As of 2022-12-06 11:14:33 UTC (more info)
Product prices and availability are accurate as of 2022-12-06 11:14:33 UTC and are subject to change. Any price and availability information displayed on http://www.amazon.com/ at the time of purchase will apply to the purchase of this product.
Availability: Not Available - stock arriving soon
Buy Now from Amazon
Product Information (more info)
CERTAIN CONTENT THAT APPEARS ON THIS SITE COMES FROM AMAZON SERVICES LLC. THIS CONTENT IS PROVIDED 'AS IS' AND IS SUBJECT TO CHANGE OR REMOVAL AT ANY TIME.

Among the extras included in this collector’s box is previously unseen footage, a feature on the restoration process, an exclusive interview with Jodorowsky, optional director commentary tracks, subtitles, two special CDs of the films’ soundtracks and a separate DVD of the first film ever made by Jodorowsky, La Cravate.


How can so much mysticism be contained in a simple DVD box set? The Films of Alejandro Jodorowsky is a divine collection of the director's early films, restored and ready for repeated viewings. For it does take several viewings to imbue Jodorowky's invented archetypes with personal meaning and to familiarize oneself with his avant-garde approach to communicating artistic concepts. In this box, El Topo and Holy Mountain, Jodorowsky's stories of spiritual journeys through barren deserts, are paired with Fando Y Lis and La Cravate, a never before seen gem from the 1950s. This alone justifies the box set. La Cravate is a Technicolor tale of a man whose sadistic girfriend urges him to visit the head shop to shop for a new head. Miming his way through rows of living human heads, and trying several on with the help of a shop manager skilled in stitching skin, this Frankensteinian story establishes Jodorowsky's affinity for pitting effusive love against cruelty for maximum tension between involved characters. Fando Y Lis, on the other hand, is an early version of the later two masterpieces, about a couple whose quest for an imaginary land in the future, called Tar, introduces them to wizened forest masters, wild packs of women bowling, and enlightened drag queens. Filmed in black and white, Fando Y Lis proves that Jodorowsky's radical use of color in El Topo and Holy Mountain is no simple trope. Here, he relies more heavily on dramatic physical action, including miming and a paraplegic protagonist who is wheeled around in a wagon by her lover.

The box set contains the film soundtracks, director commentaries, and several interviews with Jodorowsky, including the documentary, La Constellation, in which he discusses his reliance on intuition, the notion of absurdism versus mystery, and his infamous usage of violence, which he eloquently explains as creative violence versus the destructive. Though this talented director refuses the claim that he is a mystic, it becomes clear in watching this body of work that he is achieving the sublime in a visually transcendental fashion. --Trinie Dalton

Eraserhead (The Criterion Collection) [B...

Fear and Loathing in Las Vegas (The Crit...