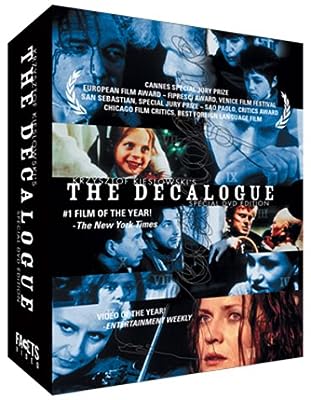 Price:
As of 2022-12-09 00:19:35 UTC (more info)
Product prices and availability are accurate as of 2022-12-09 00:19:35 UTC and are subject to change. Any price and availability information displayed on http://www.amazon.com/ at the time of purchase will apply to the purchase of this product.
Availability: Not Available - stock arriving soon
Buy Now from Amazon
Product Information (more info)
CERTAIN CONTENT THAT APPEARS ON THIS SITE COMES FROM AMAZON SERVICES LLC. THIS CONTENT IS PROVIDED 'AS IS' AND IS SUBJECT TO CHANGE OR REMOVAL AT ANY TIME.

Krzysztof Kieslowski's Decalogue explores the timeless moral issues of human existence through ten contemporary tales, each based on one of the Ten Commandments. Originally produced for Polish television, this brilliant series of ten separate but subtly intertwining films transcended the boundaries of film and TV, winning honors in both arenas as it played around the world. The Decalogue won the FIPRESCI Award at the 1989 Venice Film Festival, was honored as Best Foreign Television Program by the British Academy of Film and Television Arts and was named Best Foreign Language Film by the Chicago Film Critics Association in 1997. Each episode was co-written by Kieslowski's longtime collaborator Krzysztof Piesiewicz and features music by Zbigniew Preisner. All ten films in a three-disc set.