Story of a Prostitute (The Criterion Collection) 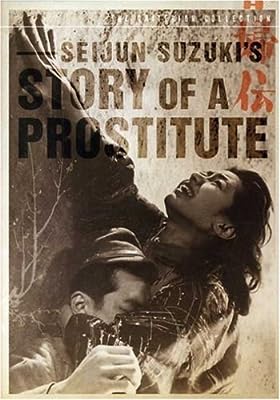 Price: $18.97
As of 2022-10-04 05:20:32 UTC (more info)
Product prices and availability are accurate as of 2022-10-04 05:20:32 UTC and are subject to change. Any price and availability information displayed on http://www.amazon.com/ at the time of purchase will apply to the purchase of this product.
Availability: Not Available - stock arriving soon
Buy Now from Amazon
Product Information (more info)
CERTAIN CONTENT THAT APPEARS ON THIS SITE COMES FROM AMAZON SERVICES LLC. THIS CONTENT IS PROVIDED 'AS IS' AND IS SUBJECT TO CHANGE OR REMOVAL AT ANY TIME.

Volunteering as a "comfort woman" on the Manchurian front, where she is expected to service hundreds of soldiers, Harumi (Yumiko Nogawa) is commandeered by the brutal Lieutenant Narita (Isao Tamagawa) but falls for the sensitive Mikami (Tamio Kawachi), Narita’s direct subordinate. In this tragic love story, director Seijun Suzuki delivers a rule-bending take on the popular Taijiro Tamura novel, challenging military and fraternal codes of honor, as seen through Harumi’s eyes.

Best known for his pop-art gangster epics like Tokyo Drifter and Pistol Opera, Japanese director Seijun Suzuki previously applied his startling camera angles, jolting editing, and hypnotic compositions to this military melodrama. Harumi (Yumiko Nogawa, who also starred in Suzuki's Gate of Flesh) is a ferociously independent prostitute who becomes a "comfort woman" for soldiers at the front of the Japan-China war in 1937. A brutal officer named Narita (Isao Tamagawa, later to appear in Suzuki's Branded to Kill) claims her for his use, but she falls in love with his passive, conflicted orderly Mikami (Tamio Kawaji, who also acted in Suzuki's Youth of the Beast--clearly, Suzuki liked his stars!). In this world, love is a few moments of ecstasy in an ocean of torment, and Suzuki cranks up both: During sex, Harumi curls her full, sensual lips into a violent grimace of pleasure; when Mikami kicks her away in his early attempts to resist her, Harumi's convulsions go into slow-motion while her crazed shrieks reverberate at regular speed on the soundtrack, lifting her agony to mythological heights. You know their affair will end badly, but Suzuki's feverish pitch compels you all the way down, and his emotional commitment gives Story of a Prostitute a very different feel from his more aloof and experimental gangster movies. The extras for this Criterion disk are few, but interviews with Suzuki, his production designer Takeo Kimura, and film critic Tadao Sato provide some valuable historical context and insight into Suzuki's directorial methods. --Bret Fetzer