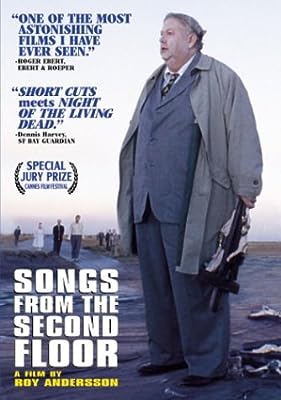 Price: $29.95
As of 2023-02-01 05:45:59 UTC (more info)
Product prices and availability are accurate as of 2023-02-01 05:45:59 UTC and are subject to change. Any price and availability information displayed on http://www.amazon.com/ at the time of purchase will apply to the purchase of this product.
Availability: Not Available - stock arriving soon
Buy Now from Amazon
Product Information (more info)
CERTAIN CONTENT THAT APPEARS ON THIS SITE COMES FROM AMAZON SERVICES LLC. THIS CONTENT IS PROVIDED 'AS IS' AND IS SUBJECT TO CHANGE OR REMOVAL AT ANY TIME.

One evening somewhere in our hemisphere, a strange series of illogical events take place: a clerk is made redundant in a degrading manner; a lost immigrant is violently attacked in a busy street; a magician makes a terrible error in his act…sleep on this night does not come easily to the citizens of this town.

The following day, the signs of chaos are taking hold as the madness grips a board of directors and the city itself is strangled by a horrendous traffic jam. In the midst of this mayhem, one person stands out: Karl - covered in soot from the fire he had set to burn down his furniture store in order to get the insurance money.

While the new millennium is casting its web and creating a vast mental breakdown, Karl gradually becomes conscious of the absurdity of the world and realizes just how difficult it is to be human.

While it falls squarely into the precious category of love-it-or-leave-it art-house oddities, the hypnotically absurd Swedish comedy Songs from the Second Floor is certainly unlike any other movie you've ever seen. That alone is reason to check it out, and many pleasures await those who are receptive to director Roy Andersson's conspicuously offbeat worldview, presented here as a series of marginally connected vignettes illustrating a bleak world that has literally ground to a halt. A perpetual traffic jam lurches through an urban landscape imbued with post-apocalyptic atmosphere, a ghost town populated by pale, shell-shocked citizens bereft of hope and teetering on the edge of collective madness. Characters and plot are nonexistent in any conventional sense; it's as if Andersson has cast himself as a detached God, gazing upon these lost souls from a distant remove, as if they were fish in a tank, lumbering through their oppressive city like zombies at the dead-end of civilization. Described by critic J. Hoberman as "slapstick Ingmar Bergman," this highly unusual film is certainly not for everyone, but if you're on its wavelength it's sure to prove unforgettably amusing. --Jeff Shannon