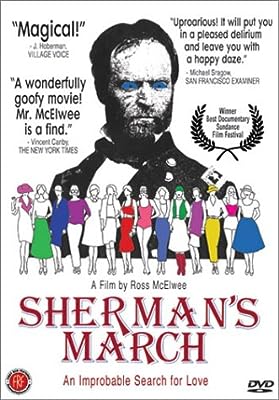 Price: $22.95
As of 2023-02-04 20:32:59 UTC (more info)
Product prices and availability are accurate as of 2023-02-04 20:32:59 UTC and are subject to change. Any price and availability information displayed on http://www.amazon.com/ at the time of purchase will apply to the purchase of this product.
Availability: Not Available - stock arriving soon
Buy Now from Amazon
Product Information (more info)
CERTAIN CONTENT THAT APPEARS ON THIS SITE COMES FROM AMAZON SERVICES LLC. THIS CONTENT IS PROVIDED 'AS IS' AND IS SUBJECT TO CHANGE OR REMOVAL AT ANY TIME.

The plot is simple. After his girlfriend leaves him, filmmaker Ross McElwee takes a voyage along the original route followed by General William Sherman -- but rather than cutting a swath of destruction designed to force the Confederate South into submission, as Sherman did, McElwee searches for love, camera in hand, "training his lens with phallic resolve on every accessible woman he meets." (Chicago Readers Circle)

SHERMAN'S MARCH was recently chosen for preservation by the Library of Congress National Film Registry as a "historically significant American motion picture." It has won best documentary awards at numerous film festivals including Sundance, has been cited by the National Board of Film Critics as one of the five best films of its year, was selected for a Cinéma du Réel retrospective at the Centre Pompidou in Paris, and chosen as "One of the Top 20 Documentaries of All-Time" by the International Documentary Association.