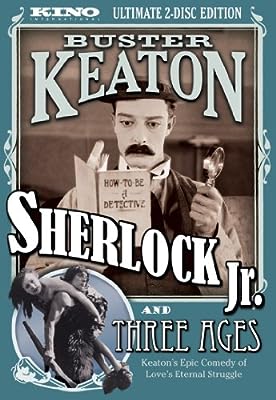 Price: $25.99
As of 2023-02-05 06:15:40 UTC (more info)
Product prices and availability are accurate as of 2023-02-05 06:15:40 UTC and are subject to change. Any price and availability information displayed on http://www.amazon.com/ at the time of purchase will apply to the purchase of this product.
Availability: Not Available - stock arriving soon
Buy Now from Amazon
Product Information (more info)
CERTAIN CONTENT THAT APPEARS ON THIS SITE COMES FROM AMAZON SERVICES LLC. THIS CONTENT IS PROVIDED 'AS IS' AND IS SUBJECT TO CHANGE OR REMOVAL AT ANY TIME.

SHERLOCK JR. SYNOPSIS: A movie projectionist and janitor (Buster Keaton) who is studying to become a detective is in love with a beautiful girl (Kathryn McGuire). On a date he presents her with chocolates and an engagement ring. However, there is another man who's also interested in his girl (Ward Crane). One day he is accused of stealing his girlfriend's father's watch. He falls asleep on the job and dreams that he is a Sherlock Holmes-type detective, solving the case of who stole a valuable pearl necklace. THREE AGES SYNOPSIS: Three plots in three different historical periods prehistoric times, ancient Rome, and modern times (the Roaring Twenties) are intercut to prove the point that men's love for woman have not significantly changed throughout history. In all three plots, characters played by Buster Keaton and Wallace Beery compete for the attention of the same woman, played by Margaret Leahy. SPECIAL FEATURES INCLUDE - SHERLOCK, JR.: Music by The Mont Alto Motion Picture Orchestra in 5.1 Dolby Digital Surround and 2.0 Stereo, Music by The Club Foot Orchestra, Vintage jazz score compiled by Jay Ward, 15 minute documentary on the making of the film, Audio commentary by historian David Kalat, Stills gallery. THREE AGES SPECIAL FEATURES: Music arranged and directed by Robert Israel in 2.0 Stereo, Organ Score by Lee Erwin, Piano score, Man s Genesis (1912): A nine-minute excerpt of the D.W. Griffith prehistoric romance that inspired Keaton s parody, Visual essay on the film s locations by Silent Echoes author Bengtson, Three Ages re-cut as a trio of stand alone short films.

The Saga of Gosta Berling

The General (The Ultimate Two-Disc Editi...