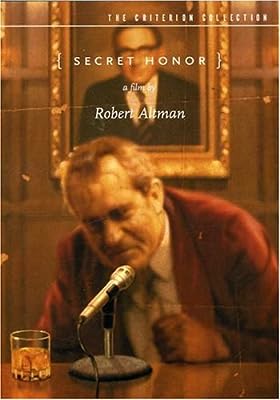 Price: $29.99
As of 2022-10-02 02:55:35 UTC (more info)
Product prices and availability are accurate as of 2022-10-02 02:55:35 UTC and are subject to change. Any price and availability information displayed on http://www.amazon.com/ at the time of purchase will apply to the purchase of this product.
Availability: Not Available - stock arriving soon
Buy Now from Amazon
Product Information (more info)
CERTAIN CONTENT THAT APPEARS ON THIS SITE COMES FROM AMAZON SERVICES LLC. THIS CONTENT IS PROVIDED 'AS IS' AND IS SUBJECT TO CHANGE OR REMOVAL AT ANY TIME.

A bravura performance by Philip Baker Hall and the probing eye of Robert Altman make Secret Honor a provocative--even haunting--speculation on history. The project originated as a one-man play, a fictional look at Richard Nixon dictating a lengthy monologue to a tape machine. The script offers some wild possibilities for explaining Watergate, but more importantly it attempts to understand Nixon the man (and succeeds far better than Oliver Stone's factual Nixon). Hall's flabbergasting performance, though it holds nothing back in its picture of a boozing, paranoid self-dramatist, manages to humanize Nixon. Altman's low-budget filming of the play tinkered little with the text or with Hall's performance, but the gliding camera, always picking out the telling angle or detail, is pure Altman. It received a tiny release in 1984, but Secret Honor now looks like a key American political fantasia, like The Manchurian Candidate wrought on a single set. --Robert Horton

Strangers When We Meet