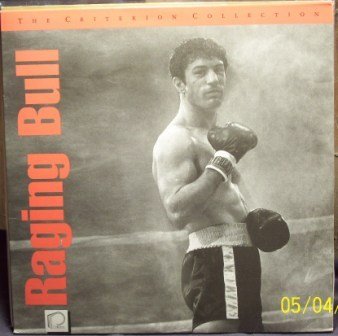 Price: $36.01
As of 2022-10-05 01:29:25 UTC (more info)
Product prices and availability are accurate as of 2022-10-05 01:29:25 UTC and are subject to change. Any price and availability information displayed on http://www.amazon.com/ at the time of purchase will apply to the purchase of this product.
Availability: Not Available - stock arriving soon
Buy Now from Amazon
Product Information (more info)
CERTAIN CONTENT THAT APPEARS ON THIS SITE COMES FROM AMAZON SERVICES LLC. THIS CONTENT IS PROVIDED 'AS IS' AND IS SUBJECT TO CHANGE OR REMOVAL AT ANY TIME.

amazing criterion collection version of the classic film, raging bull, on laserdisc. contains features not on any dvd version, including the audio essay/film commentary w/ martin scorcese and thelma schoonmaker & the film influences on raging bull feature, which includes excerpts from the films force of evil, on the waterfront and the quiet man & the siskel and ebert feature. those features not likely to ever be on any dvd version, unless criterion eventually releases a dvd of the film. the film was digitally remastered, as was the included soundtrack- which also features dolby stereo sound.