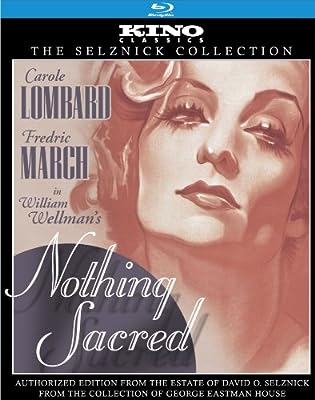 Price: $19.99
As of 2023-02-01 15:41:13 UTC (more info)
Product prices and availability are accurate as of 2023-02-01 15:41:13 UTC and are subject to change. Any price and availability information displayed on http://www.amazon.com/ at the time of purchase will apply to the purchase of this product.
Availability: Not Available - stock arriving soon
Buy Now from Amazon
Product Information (more info)
CERTAIN CONTENT THAT APPEARS ON THIS SITE COMES FROM AMAZON SERVICES LLC. THIS CONTENT IS PROVIDED 'AS IS' AND IS SUBJECT TO CHANGE OR REMOVAL AT ANY TIME.

As potent today as it was when released in 1937, this classic screwball satire stars Carole Lombard as Hazel Flagg, the small-town girl who mistakenly believes she's dying of radium poisoning. Sensing a great human interest story that will tug the public's heartstrings and help sell newspapers, exploitative journalist Wally Cook (Fredric March) brings Hazel to New York City and turns her into a media darling. Wally's callous strategy takes a sudden turn when he starts having feelings for the vulnerable Hazel. Filmed in early three-strip Technicolor and scripted by Ben Hecht and James H. Street, this sharp comedy still sizzles with its cynical take on media profiteering, and the matching of Lombard and March is unforgettably entertaining. First time ever on Blu-ray!

MASTERED IN 1080P HD FROM AN ORIGINAL 35MM NITRATE PRINT. THIS IS THE ONLY VERSION OF THE OF THE ORIGINAL FILM AUTHORIZED FOR RELEASE FROM THE ESTATE OF DAVID O. SELZNICK

Night on Earth (The Criterion Collection...