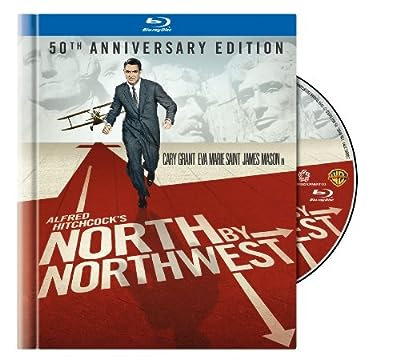 Price: $27.98
As of 2022-08-16 03:45:22 UTC (more info)
Product prices and availability are accurate as of 2022-08-16 03:45:22 UTC and are subject to change. Any price and availability information displayed on http://www.amazon.com/ at the time of purchase will apply to the purchase of this product.
Availability: Not Available - stock arriving soon
Buy Now from Amazon
Product Information (more info)
CERTAIN CONTENT THAT APPEARS ON THIS SITE COMES FROM AMAZON SERVICES LLC. THIS CONTENT IS PROVIDED 'AS IS' AND IS SUBJECT TO CHANGE OR REMOVAL AT ANY TIME.

Cary Grant teams with director Alfred Hitchcock for the fourth and final time in this superlative espionage caper judged one of the American Film Institute's Top-100 American Films and spruced up with a new digital transfer and remixed Dolby Digital Stereo. Grant plays a Manhattan advertising executive plunged into a realm of spy (James Mason) and counterspy (Eva Marie Saint) and variously abducted, framed for murder, chased and in another signature set piece, crop-dusted. He also holds on for dear life from the facial features of the Presidents on Mount Rushmore (backlot sets were used). But don't expect the Master of Suspense to leave star or audience hanging.

A strong candidate for the most sheerly entertaining and enjoyable movie ever made by a Hollywood studio (with Citizen Kane, Only Angels Have Wings and Trouble in Paradise running neck and neck). Positioned between the much heavier and more profoundly disturbing Vertigo (1958) and the stark horror of Psycho (1960), North by Northwest (1959) is Alfred Hitchcock at his most effervescent in a romantic comedy-thriller that also features one of the definitive Cary Grant performances. Which is not to say that this is just "Hitchcock Lite"; seminal Hitchcock critic Robin Wood (in his book Hitchcock's Films Revisited) makes an airtight case for this glossy MGM production as one of The Master's "unbroken series of masterpieces from Vertigo to Marnie." It's a classic Hitchcock Wrong Man scenario: Grant is Roger O. Thornhill (initials ROT), an advertising executive who is mistaken by enemy spies for a U.S. undercover agent named George Kaplan. Convinced these sinister fellows (James Mason as the boss, and Martin Landau as his henchman) are trying to kill him, Roger flees and meets a sexy Stranger on a Train (Eva Marie Saint), with whom he engages in one of the longest, most convolutedly choreographed kisses in screen history. And, of course, there are the famous set pieces: the stabbing at the United Nations, the crop-duster plane attack in the cornfield (where a pedestrian has no place to hide), and the cliffhanger finale atop the stone faces of Mount Rushmore. Plus a sparkling Ernest Lehman script and that pulse-quickening Bernard Herrmann score. What more could a moviegoer possibly desire?--Jim Emerson

Also on the Blu-ray disc
North by Northwest is a great-looking Blu-ray disc, with a sharpness and colors that seem like you're watching the film for the first time. New on the 50th anniversary edition are a one-hour documentary on Hitchcock's work "The Master's Touch: Hitchcock's Signature Style," and a shorter one (25 min.) specifically about the film, "North by Northwest: One for the Ages." It's packaged in one of Warner's Blu-ray books, with trivia, character profiles, and stills and vintage art. Older extras include screenwriter Ernest Lehman's commentary track, a 90-minute profile of star Cary Grant, the documentary from 2000 "Destination Hitchcock: The Making of North by Northwest" hosted by Eva Marie-Saint, a music-only audio track, and theatrical trailers. --David Horiuchi

Stills from North by Northwest (Click for larger image; not Blu-ray screen-captures)