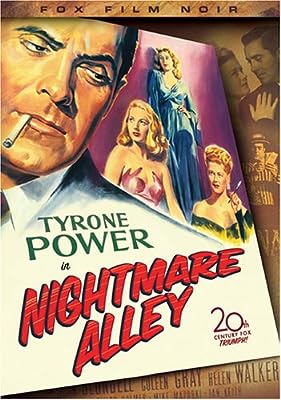 Price: $14.98
As of 2021-10-23 12:17:44 UTC (more info)
Product prices and availability are accurate as of 2021-10-23 12:17:44 UTC and are subject to change. Any price and availability information displayed on http://www.amazon.com/ at the time of purchase will apply to the purchase of this product.
Availability: Not Available - stock arriving soon
Buy Now from Amazon
Product Information (more info)
CERTAIN CONTENT THAT APPEARS ON THIS SITE COMES FROM AMAZON SERVICES LLC. THIS CONTENT IS PROVIDED 'AS IS' AND IS SUBJECT TO CHANGE OR REMOVAL AT ANY TIME.

A sideshow barker goes from mind reader to society spiritualist, then to carnival geek.

The long-awaited emergence of Nightmare Alley into the light of DVD should achieve two things: make a legendary film noir available to a new generation, and restore the horrific charge to the lately watered-down term geek, a concept that once had the power to give people very bad dreams indeed.

To his lasting credit, Tyrone Power--20th Century Fox's extraordinarily handsome but not terribly interesting star of the '30s and '40s--begged for the chance to play Stan Carlisle, the predatory charmer who snakes his way through this bracingly unwholesome story. A spieler for--and lover of--carnival mind reader Zeena (Joan Blondell), he displays uncanny skill at "reading" the susceptible rubes, including a tough sheriff who turns to jelly after Stan psychs him out. Once Stan's mastered the intricate code used in Zeena's act, he's set to dump her for the younger, sexier Molly (Coleen Gray) and go bigtime as nightclub psychic "Stanton the Great." After that, it's only a blasphemous bank shot to superstardom as a miracle worker with his own tabernacle and radio show.

Few '40s films ventured as deeply into cynicism as Nightmare Alley, or dealt so frankly with sexuality (with ripplings of polymorphous perversity yet) and power-tripping. The movie's rhythm is uncertain and Jules Furthman's screenplay telegraphs things, but the overall tone is remarkable, as are individual sequences: the freaky forced marriage of Stan and Molly in accordance with carny morality, and a creepy night scene in a park when Stanton the Great raises a ghost for a high-society client. Cinematographer Lee Garmes's chiaroscuro creates a relief map of the carnival world and what passes for life there. As for the geek... well, you'll find out what geek means. Stan does. --Richard T. Jameson