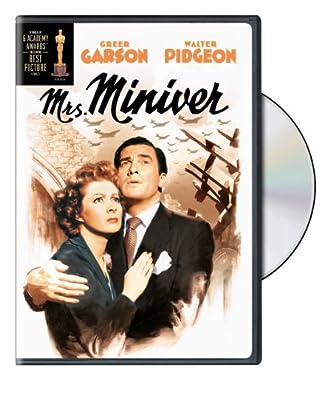 Price: $14.99
As of 2023-02-06 01:01:22 UTC (more info)
Product prices and availability are accurate as of 2023-02-06 01:01:22 UTC and are subject to change. Any price and availability information displayed on http://www.amazon.com/ at the time of purchase will apply to the purchase of this product.
Availability: Not Available - stock arriving soon
Buy Now from Amazon
Product Information (more info)
CERTAIN CONTENT THAT APPEARS ON THIS SITE COMES FROM AMAZON SERVICES LLC. THIS CONTENT IS PROVIDED 'AS IS' AND IS SUBJECT TO CHANGE OR REMOVAL AT ANY TIME.

Greer Garson delivers an Academy Award-winning performance as a British wife and mother whose courage and grace hold her family together through the terror of the World War II German Blitz--Mrs. Miniver. In this film lauded by Prime Minister Winston Churchill, which eloquently captures the hopes of England and America at a time defeat by Nazi Germany seems imminent, Mrs. Kay Miniver (Garson) refuses to allow the war to destroy her family even as she huddles with her children through bombing raids, faces enemy paratroopers and fears for her husband's life as he fights in a string of crushing defeats.

A movie doesn't win seven Oscars for nothing. A glowing Greer Garson (Best Actress) commands the screen as Mrs. Miniver, a middle-class British housewife whose strength holds her family together as World War II literally hits their home. Walter Pidgeon as her architect husband seems to be the prototype for future TV dads in this affecting portrait of love--familial and romantic--during war. But the relationship between Mrs. Miniver's college-age son (Richard Ney) and the upper-crust Carol (Best Supporting Actress Teresa Wright) is filled with inherent drama--as the war speeds up their young love, it also has the potential to doom it. The 1942 film, which also won for Best Picture and Best Director, is filled with colorful characters, snappy dialogue, and sensational plot twists. Although you spend much of the movie dreading that one of the Minivers will become a casualty of war, when it finally happens, it's not what you anticipated. Exactly what you'd expect from a legendary film that lives up to its billing. --Valerie J. Nelson

Meet Me in St. Louis [Blu-ray]