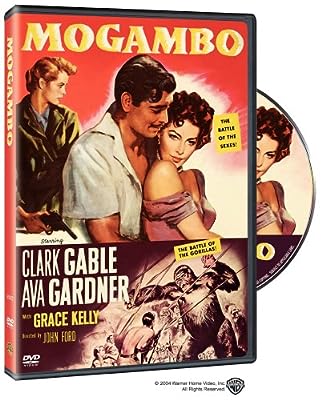 Price: $14.97
As of 2023-02-04 23:47:08 UTC (more info)
Product prices and availability are accurate as of 2023-02-04 23:47:08 UTC and are subject to change. Any price and availability information displayed on http://www.amazon.com/ at the time of purchase will apply to the purchase of this product.
Availability: Not Available - stock arriving soon
Buy Now from Amazon
Product Information (more info)
CERTAIN CONTENT THAT APPEARS ON THIS SITE COMES FROM AMAZON SERVICES LLC. THIS CONTENT IS PROVIDED 'AS IS' AND IS SUBJECT TO CHANGE OR REMOVAL AT ANY TIME.

Academy Award winners Clark Gable and Grace Kelly star with Ava Gardner in a torrid love triangle set on an African safari.Based on the film Red Dust.Filmed entirely on location in Africa.

This remake of the 1932 Red Dust is famous for using the very same romantic leading man--21 years after the fact. But when that leading man is Clark Gable, what's a little gray hair in the temples? Gable was certainly still the great strutting rooster of American movies in 1953, when Mogambo made him a safari guide juggling two much younger women. First up is good-time girl Ava Gardner, who's game for a little harmless romp with Gable after she gets stood up by a playboy in the African jungle. But when Grace Kelly--the proper wife of a visiting anthropologist (Donald Sinden)--arrives on the scene, a new affair begins. The location shooting is much in the vein of King Solomon's Mines, although the story is much more intimate. This feels like a bit of a holiday for Hollywood's top director, John Ford, and not one of his most committed pictures. Still, Ford's unparalleled eye for backlit exteriors and for the way people move around in rooms is on display, even when the script wobbles. People always joke about Gable being too old for this movie, but that doesn't take into account his durable movie-star appeal--he certainly looks every inch the Hemingwayesque hunter, and it's not that big a stretch to imagine Gardner or Kelly in the clinches with him. Indeed, he and Grace Kelly had an offscreen affair during shooting, graying temples or not. --Robert Horton