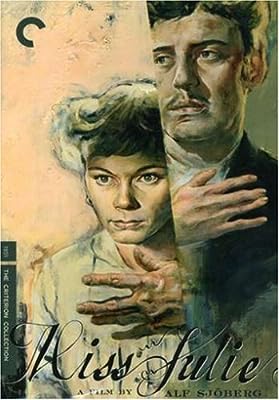 Price: $39.95
As of 2022-10-07 19:54:00 UTC (more info)
Product prices and availability are accurate as of 2022-10-07 19:54:00 UTC and are subject to change. Any price and availability information displayed on http://www.amazon.com/ at the time of purchase will apply to the purchase of this product.
Availability: Not Available - stock arriving soon
Buy Now from Amazon
Product Information (more info)
CERTAIN CONTENT THAT APPEARS ON THIS SITE COMES FROM AMAZON SERVICES LLC. THIS CONTENT IS PROVIDED 'AS IS' AND IS SUBJECT TO CHANGE OR REMOVAL AT ANY TIME.

Swedish filmmaker Alf Sjöberg s visually innovative, Cannes Grand Prix winning adaptation of August Strindberg s renowned 1888 play (censored upon its first release in the United States for its adult content) brings to scalding life the excoriating words of the stage s preeminent surveyor of all things rotten in the state of male-female relations. Miss Julie vividly depicts the battle of the sexes and classes that ensues when a wealthy businessman s daughter (Anita Bjork, in a fiercely emotional performance) falls for her father s bitter servant. Celebrated for its unique cinematic style, Sjöberg s film was an important turning point in Scandinavian cinema.

The caged finch that figures in Miss Julie's credit sequence sums up August Strindberg's tragic heroine all too well--she may be "jewel of the house", but she's also trapped. In Alf Sjöberg's expressionist adaptation, Anita Björk plays the high-born Julie to Ulf Palme's laborer's son Jean (with her feline features, Björk resembles a fair-haired Vivien Leigh). As much as the controlling aristocrat and social climbing valet detest each other, desire cannot be denied. Other impediments include the times (late-19th century Sweden), the ever-present staff (notably Max von Sydow's lusty groom), and Jean's upright fiancée (Märta Dorff). Unlike the thematically similar Lady Chatterly's Lover, their affair blooms and withers over the course of a single Midsummer's Eve, though Sjöberg's dissolves to dreams and memories lends their brief encounter an epic dimension (Jean has been smitten with Julie since childhood).

Like his protégé Ingmar Bergman, Sjöberg divided his time between stage and screen--the same as his theatrically trained leads. Though they remain fully clothed, suggestions of sado-masochism led American censors to ban the film in 1951. Shot by August's descendant, Göran Strindberg, the Cannes Grand Prize winner bears the otherworldly look of Bergman's The Magician combined with the hothouse atmosphere of Elia Kazan's A Streetcar named Desire. As Peter Cowie notes in the illuminating video essay, Strindberg's stormy marriage to a baroness inspired his masterpiece (not for nothing did he title his autobiography The Son of a Servant). In the booklet, Birgitta Steene puts the playwright's career in further perspective, while Peter Mathews does the honors for the director. The supplements conclude with a short Sjöberg interview from 1966, a moving made-for-TV documentary from 2006 (Miss Julie: 100 Years in the Limelight), and the US theatrical trailer. --Kathleen C. Fennessy