Man of the West [Blu-ray] 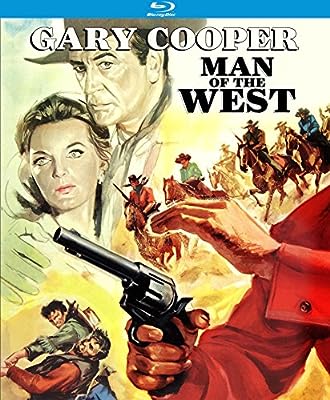 Price: $16.99
As of 2023-02-01 08:45:29 UTC (more info)
Product prices and availability are accurate as of 2023-02-01 08:45:29 UTC and are subject to change. Any price and availability information displayed on http://www.amazon.com/ at the time of purchase will apply to the purchase of this product.
Availability: Not Available - stock arriving soon
Buy Now from Amazon
Product Information (more info)
CERTAIN CONTENT THAT APPEARS ON THIS SITE COMES FROM AMAZON SERVICES LLC. THIS CONTENT IS PROVIDED 'AS IS' AND IS SUBJECT TO CHANGE OR REMOVAL AT ANY TIME.

Screen legend Gary Cooper (Vera Cruz) powerfully demonstrates why he will forever be remembered as one of the most original and authentic stars of the screen. Tight-lipped, capable yet vulnerable, Cooper's portrayal of a former outlaw whose past returns to haunt him ranks among his best. When the train he is on gets robbed, Link Jones (Cooper) finds himself unwillingly reunited with his old gang. Dock Tobin (Lee J. Cobb, 12 Angry Men), the gang's sadistic, half-crazed patriarch, was like a father to Link some twenty years ago welcomes him back with open arms, to survive his old vicious gang, Link must take up his old killing ways. Renowned for its breathtakingly cinematography and violent fist fight between Cooper and Jack Lord (TV's Hawaii Five-O), this strong allegorical film directed by the great Anthony Mann (The Naked Spur) is now considered one of the finest achievements from the western's golden age.