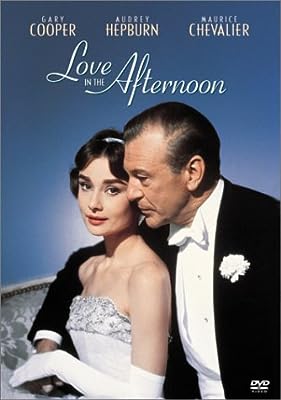 Price: $19.98
As of 2022-10-03 19:01:34 UTC (more info)
Product prices and availability are accurate as of 2022-10-03 19:01:34 UTC and are subject to change. Any price and availability information displayed on http://www.amazon.com/ at the time of purchase will apply to the purchase of this product.
Availability: Not Available - stock arriving soon
Buy Now from Amazon
Product Information (more info)
CERTAIN CONTENT THAT APPEARS ON THIS SITE COMES FROM AMAZON SERVICES LLC. THIS CONTENT IS PROVIDED 'AS IS' AND IS SUBJECT TO CHANGE OR REMOVAL AT ANY TIME.

Fairy-tale Paris doesn't get more enchanting than Billy Wilder's Love in the Afternoon, an ode to picnics on the grass and champagne at the Ritz. Audrey Hepburn (who had already made Sabrina with Wilder) is at her best as the inexperienced cellist with a fascination for millionaire American playboy Gary Cooper. Maurice Chevalier (who else?) is Hepburn's father, a private detective with ample evidence of Cooper's crowded history of l'amour. Alongside the sheen of the romance is Wilder's unerring sense of craftsmanship; watch how inanimate objects such as a liquor tray, a white carnation, or the little dog in the suite next door are developed into sublime running gags. The age difference between the two leads has often been questioned, but perhaps this is what gives the gossamer material the whiff of welcome melancholy. The final three minutes leave no doubt that Wilder hatched the best endings in Hollywood history. --Robert Horton