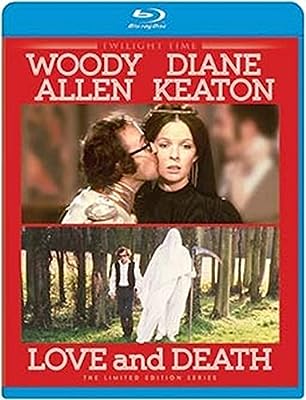 Price: $33.99
As of 2022-08-11 06:15:40 UTC (more info)
Product prices and availability are accurate as of 2022-08-11 06:15:40 UTC and are subject to change. Any price and availability information displayed on http://www.amazon.com/ at the time of purchase will apply to the purchase of this product.
Availability: Not Available - stock arriving soon
Buy Now from Amazon
Product Information (more info)
CERTAIN CONTENT THAT APPEARS ON THIS SITE COMES FROM AMAZON SERVICES LLC. THIS CONTENT IS PROVIDED 'AS IS' AND IS SUBJECT TO CHANGE OR REMOVAL AT ANY TIME.

"Woody Allen's grandest work... "Love and Death is [Allen's] most ambitious experiment with the comic possibilities of film...done with such care, love and lunacy." -Roger Ebert, Chicago Sun-Times "Tolstoy by way of Bob Hope, with enough room for Mozart and Prokofiev...the beauty of Ghislain Cloquet's cinematography is part of the joke." -Fernando F. Croce, Cinepassion Woody Allen takes on the monolith of Russian literature-with a bit of Ingmar Bergman thrown in for good measure-with Love and Death (1975), a deadpan costume epic set against the sweeping backdrop of the Napoleonic Wars. Allen plays Boris, a philosophical coward who becomes an inadvertent war hero and then a potential assassin thanks to the encouragement of his mad(cap) wife, Sonja (the fab Diane Keaton). Shot by the great cinematographer Ghislain Cloquet (Tess, Au Hasard Balthazar).