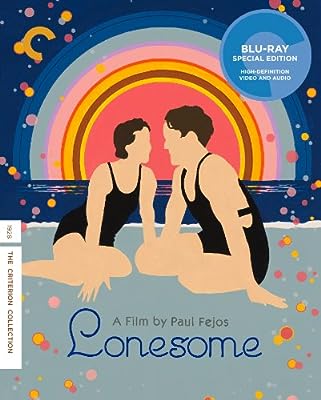 Price: $24.02
As of 2022-10-03 08:28:21 UTC (more info)
Product prices and availability are accurate as of 2022-10-03 08:28:21 UTC and are subject to change. Any price and availability information displayed on http://www.amazon.com/ at the time of purchase will apply to the purchase of this product.
Availability: Not Available - stock arriving soon
Buy Now from Amazon
Product Information (more info)
CERTAIN CONTENT THAT APPEARS ON THIS SITE COMES FROM AMAZON SERVICES LLC. THIS CONTENT IS PROVIDED 'AS IS' AND IS SUBJECT TO CHANGE OR REMOVAL AT ANY TIME.

The early Hollywood gem Lonesome is the creation of a little-known but audacious and one-of-a-kind auteur, Paul Fejos (a filmmaker/explorer/anthropologist/doctor!), who bridged the gap between the silent and sound eras. Fejos pulled out all the stops for this lovely New York City symphony set in antic Coney Island during the Fourth of July weekend—employing color tinting, superimposition effects, experimental editing, and a roving camera (plus three dialogue scenes, added because of the craze for talkies). For years, Lonesome has been a rare treat for festival and cinematheque audiences; it’s only now coming to home video. Rarer still are the two other Fejos films included in this release: The Last Performance (featuring a new score by Donald Sosin) and a reconstruction of the previously incomplete sound version of Broadway, in its time the most expensive film ever produced at Universal.