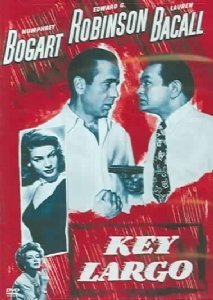 Price: $19.98
As of 2023-02-01 12:35:41 UTC (more info)
Product prices and availability are accurate as of 2023-02-01 12:35:41 UTC and are subject to change. Any price and availability information displayed on http://www.amazon.com/ at the time of purchase will apply to the purchase of this product.
Availability: Not Available - stock arriving soon
Buy Now from Amazon
Product Information (more info)
CERTAIN CONTENT THAT APPEARS ON THIS SITE COMES FROM AMAZON SERVICES LLC. THIS CONTENT IS PROVIDED 'AS IS' AND IS SUBJECT TO CHANGE OR REMOVAL AT ANY TIME.

A hurricane swells outside, but it's nothing compared to the storm within the hotel at Key Largo. There, sadistic mobster Johnny Rocco (Edward G. Robinson) holes up - and holds at gunpoint hotel owner Nora Temple (Lauren Bacall), her invalid father-in-law (Lionel Barrymore) and ex-GI Frank McCloud (Humphrey Bogart). McCloud's the one man capable of standing up against the belligerent Rocco. But the postwar world's realities may have taken all the fight out of him. John Huston co-wrote and compellingly directs this film of Maxwell Anderson's 1939 play with a searing Academy Award-winning* performance by Claire Trevor as Rocco's gold-hearted, boozy moll. In Huston's hands, it becomes a powerful, sweltering classic.