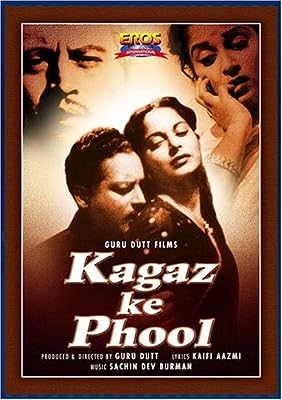 Price: $8.99
As of 2022-10-04 17:22:33 UTC (more info)
Product prices and availability are accurate as of 2022-10-04 17:22:33 UTC and are subject to change. Any price and availability information displayed on http://www.amazon.com/ at the time of purchase will apply to the purchase of this product.
Availability: Not Available - stock arriving soon
Buy Now from Amazon
Product Information (more info)
CERTAIN CONTENT THAT APPEARS ON THIS SITE COMES FROM AMAZON SERVICES LLC. THIS CONTENT IS PROVIDED 'AS IS' AND IS SUBJECT TO CHANGE OR REMOVAL AT ANY TIME.

Suresh Sinha is a discarded decrepit ex-director, he enters an empty stage of Ajanta Studios and remember his past and send the picture into a flashback. The flashback shows Sinha to be a properous director. His relationship with his wife is not well, his wife lives away in Delhi with her parents who have misconceptions about Sinha as he is in the film business. Pammi, Sinha's little daughter, is in a school in Dehra Dun. He visits Dehra Dun but the school authorities does not allow him to meet his daughter as they have instructions from Pammi's mother. Sinha then proceeds to Delhi to settle his domestic affairs. Sinha's wife refuses even to see him. Sinha meets Shanti, a young and pretty inmate of an orphange. Sinha, offers her the heroine's role. The picture succeeds and so does Shanti. Their friendship is conveyed by press gossip even to Pammi who feels highly embrrassed at the news and runs away from school to reach Bombay. The unlikely scene leades to Shanti promising Pammi to go away from her father's life. Shanti keeps her word despite Sinha's melancholy face and despite her contact with the producer. Pammi's efforts however fail to bring about any reconciliation between her partners who then actually go to court for the custody of Pammi. The court awards the custody to Sinha's wife. Sinha now begins drinking, neglects his work, produces a flop and finds himself out of job and then out of his big house which is auctioned off to pay his debts. Hearing the news of his misery, Shanti, who had meanwhile become a teacher in a village, returns to Bombay and agrees to act in a picture just to provide Sinha another chance to direct . But Sinha refuses to be helped and prefers to sink deeper and deeper into misery. Shanti stays on to become a famous star. The flashback ends with Sinha breathing his last inside the studio.