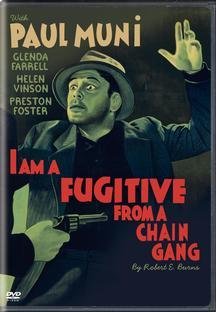 Price: $19.98
As of 2022-10-04 17:37:50 UTC (more info)
Product prices and availability are accurate as of 2022-10-04 17:37:50 UTC and are subject to change. Any price and availability information displayed on http://www.amazon.com/ at the time of purchase will apply to the purchase of this product.
Availability: Not Available - stock arriving soon
Buy Now from Amazon
Product Information (more info)
CERTAIN CONTENT THAT APPEARS ON THIS SITE COMES FROM AMAZON SERVICES LLC. THIS CONTENT IS PROVIDED 'AS IS' AND IS SUBJECT TO CHANGE OR REMOVAL AT ANY TIME.

I Am a Fugitive from a Chain Gang is one of the toughest and most uncompromising movies to ever come out of Hollywood. Paul Muni stars as a regular Joe, just back from World War I, who is unjustly convicted of a crime and sentenced to 10 years of bruisingly unfair treatment on a chain gang. Even a successful escape can't shake the spectre of the chains, nor the amazingly fatalistic twists the screenplay has in store. This picture could only have been made at Warner Bros., where social-justice movies flourished in the 1930s and criticism of judicial systems and prisons was sanctioned. Muni's weird acting style (he was recently off Scarface) somehow fits the film's furious tone, and director Mervyn LeRoy--as in his earlier Little Caesar--was dexterous enough to build the action to an unforgettable ending. It's a film that filters the American Dream through Depression realities and noirish pessimism (with a streak of pre-Code sexual frankness--note the one-night "friend" Muni makes the night of his escape). This one holds up, folks; it's a stunner. --Robert Horton