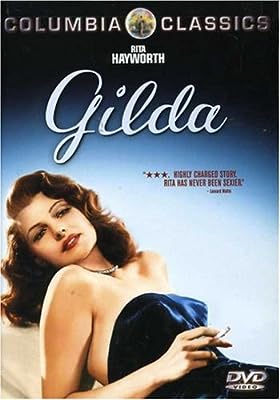 Price: $9.99
As of 2021-12-02 19:39:06 UTC (more info)
Product prices and availability are accurate as of 2021-12-02 19:39:06 UTC and are subject to change. Any price and availability information displayed on http://www.amazon.com/ at the time of purchase will apply to the purchase of this product.
Availability: Not Available - stock arriving soon
Buy Now from Amazon
Product Information (more info)
CERTAIN CONTENT THAT APPEARS ON THIS SITE COMES FROM AMAZON SERVICES LLC. THIS CONTENT IS PROVIDED 'AS IS' AND IS SUBJECT TO CHANGE OR REMOVAL AT ANY TIME.

The legendary Rita Hayworth sizzles with sensuality and magnetism as she sings "Put the Blame on Mame" and delivers a dazzling performance as the enticing temptress Gilda. In the story of GILDA, Johnny Farrell (Glenn Ford) goes to work for Ballin Mundson (George Macready), the proprietor of an illegal gambling casino in a South American city, and quickly rises to become Mundson's main man. All iswell until Mundson returns from a trip with his new bride Gilda - a woman from Johnny's past. Mundson, unaware of their previous love affair, assigns Farrell the job of keeping Gilda a faithful wife.Fraught with hatred, Gilda does her best to antagonize, intimidate, and instill jealousy in Farrell- until circumstances allow him to get even.

All film noirs need deceit, betrayal, dialogue hard as diamonds--and dames even harder than that. But Gilda is the only one with the dame front and center, and for good reason. Rita Hayworth shimmers in the 1946 classic, which spins on a tortured plot involving the title character (Hayworth); her imperious husband (George Macready), a ruthless casino owner and head of an Argentine tungsten cartel (!); and Johnny Farrell (Glenn Ford), Gilda's ex-lover and now her husband's go-fer. But no one watches Gilda for the plot, except to learn that all the characters have secrets--perhaps even ones they would kill for. Hayworth captures Gilda's vulnerability beneath her devil-may-care front ("If I'd been a ranch, they would have named me the Bar Nothing"). Not to be missed: Hayworth's slinky striptease to "Put the Blame on Mame." --Anne Hurley

Gunfight At The O.K. Corral