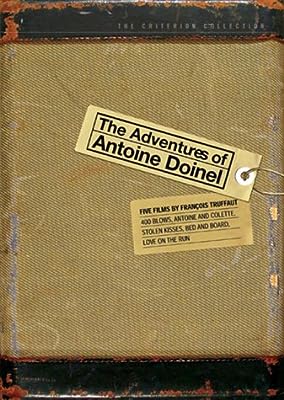 Price: $99.95
As of 2022-08-16 12:20:46 UTC (more info)
Product prices and availability are accurate as of 2022-08-16 12:20:46 UTC and are subject to change. Any price and availability information displayed on http://www.amazon.com/ at the time of purchase will apply to the purchase of this product.
Availability: Not Available - stock arriving soon
Buy Now from Amazon
Product Information (more info)
CERTAIN CONTENT THAT APPEARS ON THIS SITE COMES FROM AMAZON SERVICES LLC. THIS CONTENT IS PROVIDED 'AS IS' AND IS SUBJECT TO CHANGE OR REMOVAL AT ANY TIME.

The release of François Truffaut’s The 400 Blows (Les Quatre cents coups) in 1959 shook world cinema to its foundations. The now-classic portrait of troubled adolescence introduced a major new director in the cinematic landscape and was an inaugural gesture of the revolutionary French New Wave. But The 400 Blows did not only introduce the world to its precocious director—it also unveiled his indelible creation: Antoine Doinel. Initially patterned closely after Truffaut himself, the Doinel character (played by the irrepressible and iconic Jean-Pierre Léaud) reappeared in four subsequent films that knowingly portrayed his myriad frustrations and romantic entanglements from his stormy teens through marriage, children, divorce, and adulthood. With The Adventures of Antoine Doinel, Criterion is proud to present Truffaut’s celebrated saga in its entirety: the feature films The 400 Blows, Stolen Kisses, Bed and Board, and Love on the Run, and the 1962 short subject, Antoine and Colette, in a special edition five-disc box set.

The Adventures of Antoine Doinel captures François Truffaut's alter ego (played by Jean-Pierre Léaud) over the span of five films and 20 years. Truffaut's first feature was The 400 Blows (1959), in which Doinel is a boy who turns to petty crime in the face of neglect at home and hard times at a reform school. The film helped usher in the heady spirit of the French new wave and introduced the Doinel character. Poignant, exhilarating, and fun (there's a parade of cameo appearances from some of the essential icons and directors from the movement), this film is an important classic.

The second film to feature Doinel, "Antoine and Collette" (1962) was originally made for the omnibus film Love at Twenty but has outlived its companion shorts. As romantic and gently ironic as The 400 Blows is harsh and haunting, this modest 20-minute lark finds a teenage Antoine pursuing the lovely, lithe 20-year-old Colette (Marie-France Pisier) like a lovesick puppy. The comic sweetness of this episode sets the tone for all future Doinel films, and Léaud, who matured into the poster boy for the French new wave, displays the lanky charm and self-effacing egotism that propelled him through some of the greatest films of the next two decades.

Stolen Kisses (1968) opens with the now-grown Doinel sprung from military prison with a dishonorable discharge. He woos the perky but unresponsive object of his affections, Christine (Claude Jade), while he engages in a series of professions--hotel night watchman, private investigator, TV repairman--with mixed success and comic entanglements. But when he falls in love with the elegant wife of his client (Delphine Seyrig), Christine realizes she misses Antoine's persistence and clumsy passes, so she embarks on a seductive plan of her own.

Bed and Board (1970) finds Doinel married to Christine and still plugging away at odd jobs. He learns of his impending fatherhood, but then throws a monkey wrench into his new happiness when he becomes obsessed with a beautiful young Japanese woman (Hiroku Berghauer). Truffaut enlivens Doinel's courtyard apartment with the bustle and business of neighbors and pays homage to comic auteur Jacques Tati. However, he tempers the giddy screwball kookiness with a less forgiving disposition toward Antoine's passionate irresponsibility and emotional impulsiveness.

Love on the Run (1979) was Truffaut's last film in the series. Here, our compulsive liar and general scamp is found out time and time again, but, as the women of the film find, it's impossible to blame him entirely. The film stands on its own as a light comedy but carries much more resonance if watched in its proper place in the series.