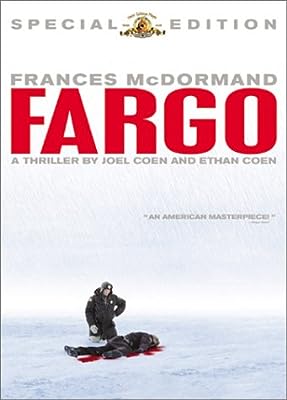 Price: $7.99
As of 2023-02-04 20:44:57 UTC (more info)
Product prices and availability are accurate as of 2023-02-04 20:44:57 UTC and are subject to change. Any price and availability information displayed on http://www.amazon.com/ at the time of purchase will apply to the purchase of this product.
Availability: Not Available - stock arriving soon
Buy Now from Amazon
Product Information (more info)
CERTAIN CONTENT THAT APPEARS ON THIS SITE COMES FROM AMAZON SERVICES LLC. THIS CONTENT IS PROVIDED 'AS IS' AND IS SUBJECT TO CHANGE OR REMOVAL AT ANY TIME.

Leave it to the wildly inventive Coen brothers (Joel directs, Ethan produces, they both write) to concoct a fiendishly clever kidnap caper that's simultaneously a comedy of errors, a Midwestern satire, a taut suspense thriller, and a violent tale of criminal misfortune. It all begins when a hapless car salesman (played to perfection by William H. Macy) ineptly orchestrates the kidnapping of his own wife. The plan goes horribly awry in the hands of bumbling bad guys Steve Buscemi and Peter Stormare (one of them being described by a local girl as "kinda funny lookin'" and "not circumcised"), and the pregnant sheriff of Brainerd, Minnesota, (played exquisitely by Frances McDormand in an Oscar-winning role) is suddenly faced with a case of multiple murders. Her investigation is laced with offbeat observations about life in the rural hinterland of Minnesota and North Dakota, and Fargo embraces its local yokels with affectionate humor. At times shocking and hilarious, Fargo is utterly unique and distinctly American, bearing the unmistakable stamp of its inspired creators. --Jeff Shannon

Four Horsemen of the Apocalypse (1962)