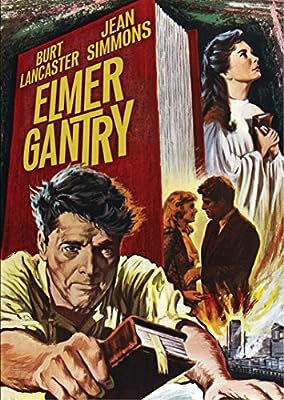 Price: $13.99
As of 2022-10-03 19:54:17 UTC (more info)
Product prices and availability are accurate as of 2022-10-03 19:54:17 UTC and are subject to change. Any price and availability information displayed on http://www.amazon.com/ at the time of purchase will apply to the purchase of this product.
Availability: Not Available - stock arriving soon
Buy Now from Amazon
Product Information (more info)
CERTAIN CONTENT THAT APPEARS ON THIS SITE COMES FROM AMAZON SERVICES LLC. THIS CONTENT IS PROVIDED 'AS IS' AND IS SUBJECT TO CHANGE OR REMOVAL AT ANY TIME.

Handsome. Opportunistic. Immoral. Traveling salesman Elmer Gantry (Burt Lancaster, Run Silent, Run Deep) is all this and more. So when he stumbles into a revival meeting and discovers that he can hustle money in a tent-show as easily as in a saloon, Gantry converts to evangelism. Joining forces with Sister Sharon Falconer (Jean Simmons, Spartacus), he delivers demon-bashing oratories that bring him fame and fortune. But when an old flame (Shirley Jones, TV s The Partridge Family) re-appears, Gantry is forced to confront demons of a more worldly order -- long-buried secrets that will make his saintly life a veritable Hell on Earth! Wonderfully directed by Richard Brooks (In Cold Blood) and based on the bestselling novel by Sinclair Lewis (Dodsworth). Winner of 3 Academy Awards including Actor (Lancaster), Supporting Actress (Jones) and Adapted Screenplay (Brooks).