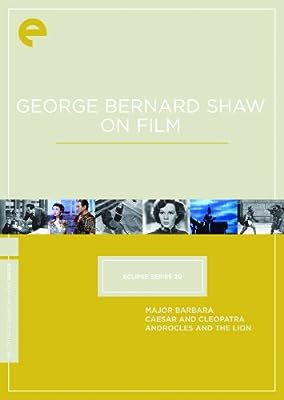 Price: $27.03
As of 2022-10-06 22:44:00 UTC (more info)
Product prices and availability are accurate as of 2022-10-06 22:44:00 UTC and are subject to change. Any price and availability information displayed on http://www.amazon.com/ at the time of purchase will apply to the purchase of this product.
Availability: Not Available - stock arriving soon
Buy Now from Amazon
Product Information (more info)
CERTAIN CONTENT THAT APPEARS ON THIS SITE COMES FROM AMAZON SERVICES LLC. THIS CONTENT IS PROVIDED 'AS IS' AND IS SUBJECT TO CHANGE OR REMOVAL AT ANY TIME.

The hugely influential Nobel Prize–winning critic and playwright George Bernard Shaw was notoriously reluctant to allow his writing to be adapted for the cinema. Yet thanks to the persistence of Hungarian producer Gabriel Pascal, Shaw finally agreed to collaborate on a series of screen versions of his witty, social-minded plays, starting with the Oscar-winning Pygmalion. The three other films that resulted from this famed alliance, Major Barbara, Caesar and Cleopatra, and Androcles and the Lion, long overshadowed by Pygmalion, are gathered here for the first time on DVD. These clever, handsomely mounted entertainments star such luminaries of the big screen as Vivien Leigh, Claude Rains, Wendy Hiller, and Rex Harrison.