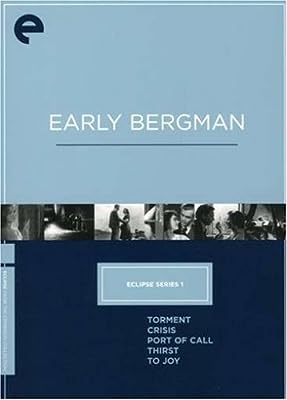 Price: $49.98
As of 2021-10-22 08:04:11 UTC (more info)
Product prices and availability are accurate as of 2021-10-22 08:04:11 UTC and are subject to change. Any price and availability information displayed on http://www.amazon.com/ at the time of purchase will apply to the purchase of this product.
Availability: Not Available - stock arriving soon
Buy Now from Amazon
Product Information (more info)
CERTAIN CONTENT THAT APPEARS ON THIS SITE COMES FROM AMAZON SERVICES LLC. THIS CONTENT IS PROVIDED 'AS IS' AND IS SUBJECT TO CHANGE OR REMOVAL AT ANY TIME.

Featuring: TORMENT (1944) In Ingmar Bergman's first produced screenplay, the dark coming-of-age drama Torment, Widgren, a boarding-school senior, is terrorized by his sadistic Latin teacher. When he falls for Bertha, a troubled local girl, he finds himself caught up even further in a web of emotional mind games. CRISIS (1946) Urban beauty-shop proprietress Miss Jenny arrives in an idyllic rural town one morning to whisk away her eighteen-year-old daughter, Nelly, whom she abandoned as a child, from the loving woman who had raised her. Once in Stockholm, Nelly receives a crash course in adult corruption and wrenching heartbreak. PORT OF CALL (1948) Berit, a suicidal young woman living in a working-class port town, unexpectedly falls for Gosta, a sailor on leave. Haunted by a troubled past and held in a vice grip by her domineering mother, Berit begins to hope that her relationship with Gosta might save her from her own self-destruction. THIRST (1949) A couple traveling across a war-ravaged Europe. A disintegrating marriage. A ballet dancer's scarred past. Her friend's psychological agony. Elliptically told in flashbacks, Thirst shows people enslaved to memory and united in isolation. TO JOY (1949) An orchestra violinist's dreams of becoming a celebrated soloist and fears of his own mediocrity get in the way of his marriage to the patient, caring Marta. Played out to the music of Beethoven, To Joy is a heartbreaking tale of one man's inability to overcome the demons standing in the way of his happiness

In Hollywood, falling in love is a happy ending; in Ingmar Bergman movies, love is only the beginning and the ending is always in doubt. But Bergman's reputation for gloom is undeserved; though the five films in Early Bergman have titles like Torment and Crisis, they bristle with life, in all its passion and tenderness (ironically, the bleakest of the lot is titled To Joy). Sadness and whimsy walk hand in hand: As a young woman puts on her lipstick, she draws a frowning face on the mirror; as a husband hears about his wife's death, a small boy turns a toy bear on a stool in the background.

Bergman's career began as a screenwriter with Torment, a noir-ish tale of a volatile student and his sadistic Latin teacher. Stylishly directed by Alf Sjoberg, Torment's script already has Bergman trademarks: Vivid, unpredictable characters, sexual frankness, and a skeptical view of cultural pillars, from romance to honor. Bergman's first directorial venture, Crisis, brings in another prominent element, the subtle yet powerful conflicts among women, as a young girl is torn between her shallow, flamboyant birth mother and the caring but conservative woman who raised her. The tensions between daughter and mother persist in Port of Call, one of the strongest in the set; a rebellious young woman, whose mother sent her to reform school, staves off suicidal impulses by falling in love with a sailor. This brief and depressing-sounding summary doesn't capture the fluid camera movement or the movie's emotional potency, which balances misery with yearning and hope. Thirst demonstrates an increasing narrative sophistication; as it depicts a troubled marriage, the movie plucks multiple storylines like a musician plucking the strings of his instrument. Music itself is a central concern of the last of these five films: To Joy, in which a self-obsessed violinist corrodes his marriage with fear and self-doubt.

There's a startling freshness and vitality to the performances in all of Bergman's films, made all the more striking in contrast to Sjoberg's (though Torment is far from stale). From the beginning, Bergman draws something genuine from his actors, soon developing a visual style that manages to be alluring yet seemingly effortless, never struggling for an arresting image but simply capturing the unexpected jolts of life. The movies in Early Bergman are more raw than his later classics (Wild Strawberries, The Seventh Seal, Fanny & Alexander), but sometimes talent can be most clearly seen in its less polished form. --Bret Fetzer