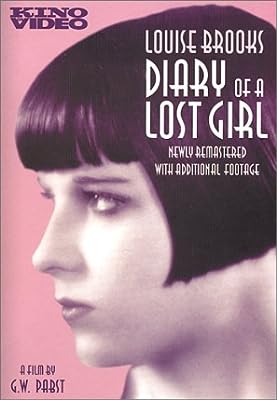 Price: $33.04
As of 2023-02-04 11:35:46 UTC (more info)
Product prices and availability are accurate as of 2023-02-04 11:35:46 UTC and are subject to change. Any price and availability information displayed on http://www.amazon.com/ at the time of purchase will apply to the purchase of this product.
Availability: Not Available - stock arriving soon
Buy Now from Amazon
Product Information (more info)
CERTAIN CONTENT THAT APPEARS ON THIS SITE COMES FROM AMAZON SERVICES LLC. THIS CONTENT IS PROVIDED 'AS IS' AND IS SUBJECT TO CHANGE OR REMOVAL AT ANY TIME.

Diary of a Lost Girl represents the second and final work of one of the cinema's most compelling collaborations: G.W. Pabst and Louise Brooks. Together with Pandora's Box (1928), Diary confirmed Pabst's artistry as one of the great directors of the silent period and established Brooks as an "actress of brilliance, a luminescent personality and a beauty unparalleled in screen history" (Kevin Brownlow, The Parade's Gone By). Brooks, in a delicately restrained performance, plays the naive daughter of a prosperous pharmacist. Shy and faunlike, the wide-eyed innocent is made pregnant by her father's young assistant. To preserve family honor, she is sent to a repressive reform school from which she eventually escapes. Penniless and homeless, she is directed to a brothel where she becomes liberated and lives for the moment with radiant physical abandon. This Kino on Video version of Diary of a Lost Girl has been mastered from a new restoration of the film made by a group of European archives (see insert card) which adds approximately nine minutes of previously censored footage never seen in the United States. An evocative new score has been added by Joseph Turrin.

The mystique and stunning beauty of Louise Brooks are on glorious display in Diary of a Lost Girl (1929), Brooks's second historic collaboration (after Pandora's Box) with director G.W. Pabst. In a restrained performance that a lesser actress would've taken over the top, Brooks strikes a resonant note of innocence, tenacity, and worldliness as Thymian, the idealistic daughter of an unscrupulous pharmacist, who is raped by her father's lecherous assistant. Forced to leave her child with a midwife, she escapes from a hellish reform school and is drawn into a brothel as if her fate were predetermined. Pabst tells her story (from Margurethe Bohme's novel) with lurid flourishes, especially in his encouragement of leering, grotesque performances from Thymian's ruthless exploiters. Mature even by modern standards, this lurid melodrama spans a full spectrum of emotions, expressed with subtle nuance by Brooks, who casts her spell in close-ups that will take your breath away. --Jeff Shannon