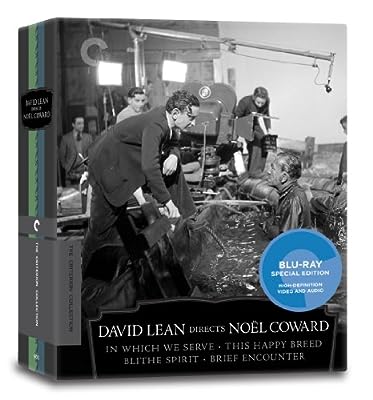 Price: $99.95
As of 2022-11-28 08:27:48 UTC (more info)
Product prices and availability are accurate as of 2022-11-28 08:27:48 UTC and are subject to change. Any price and availability information displayed on http://www.amazon.com/ at the time of purchase will apply to the purchase of this product.
Availability: Not Available - stock arriving soon
Buy Now from Amazon
Product Information (more info)
CERTAIN CONTENT THAT APPEARS ON THIS SITE COMES FROM AMAZON SERVICES LLC. THIS CONTENT IS PROVIDED 'AS IS' AND IS SUBJECT TO CHANGE OR REMOVAL AT ANY TIME.

In the 1940s, the wit of playwright Noel Coward (Design for Living) and the craft of filmmaker David Lean (Lawrence of Arabia) melded harmoniously in one of cinema’s greatest writer-director collaborations. With the wartime military drama sensation In Which We Serve, Coward and Lean (along with producing partners Ronald Neame and Anthony Havelock-Allan) embarked on a series of literate, socially engaged, and enormously entertaining pictures that ranged from domestic epic (This Happy Breed) to whimsical comedy (Blithe Spirit) to poignant romance (Brief Encounter). These films created a lasting testament to Coward’s artistic legacy and introduced Lean’s visionary talents to the world.

In Which We Serve In the midst of World War II, the renowned playwright Noel Coward engaged a young film editor named David Lean to help him realize his vision for an action drama about a group of Royal Navy sailors (roles that would be filled by Coward himself, Great Expectations’ Bernard Miles, and Ryan’s Daughter’s John Mills, among others) fighting the Germans in the Mediterranean. Coward and Lean ended up codirecting the large-scale project—an impressive undertaking, especially considering that neither of them had directed for the big screen before (this would be Coward’s only such credit). Cutting between a major naval battle and flashbacks to the men’s lives before they left home, In Which We Serve (an Oscar nominee for best picture) was a major breakthrough for both filmmakers and a sensitive and stirring piece of propaganda.

This Happy Breed David Lean brings to vivid emotional life Noel Coward’s epic chronicle of a working-class family in the London suburbs over the course of two decades. Robert Newton (Oliver Twist) and Celia Johnson (Brief Encounter) are surpassingly affecting as Frank and Ethel Gibbons, a couple with three children whose modest household is touched by joy and tragedy from the tail end of the First World War to the beginning of the Second. With its mix of politics and melodrama, This Happy Breed is a quintessential British domestic drama, featuring subtly expressive Technicolor cinematography by Ronald Neame and a remarkable supporting cast including John Mills, Stanley Holloway (My Fair Lady), and Kay Walsh (The Horse’s Mouth)

Blithe Spirit Blithe Spirit, David Lean’s delightful film version of Noel Coward’s theater sensation (onstage, it broke London box-office records before hitting Broadway), stars Rex Harrison (Unfaithfully Yours) as a novelist who cheekily invites a medium (The Importance of Being Earnest’s Margaret Rutherford) to his house to conduct a séance, hoping the experience will inspire a book he’s working on. Things go decidedly not as planned when she summons the spirit of his dead first wife (Kay Hammond), a severe inconvenience for his current one (Constance Cummings). Employing Oscar-winning special effects to spruce up Coward’s theatrical farce, Blithe Spirit is a sprightly supernatural comedy with winning performances.

Brief Encounter After a chance meeting on a train platform, a married doctor (The Third Man’s Trevor Howard) and a suburban housewife (This Happy Breed’s Celia Johnson) enter into a muted but passionate, ultimately doomed, love affair. With its evocatively fog-enshrouded setting, swooning Rachmaninoff score, and pair of remarkable performances (Johnson was nominated for an Oscar for her role), David Lean’s film of Noel Coward’s play Still Life deftly explores the thrill, pain, and tenderness of an illicit romance, and has influenced many a cinematic brief encounter since its release.