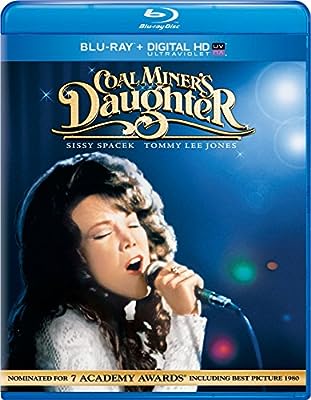 Price:
As of 2022-10-04 12:13:40 UTC (more info)
Product prices and availability are accurate as of 2022-10-04 12:13:40 UTC and are subject to change. Any price and availability information displayed on http://www.amazon.com/ at the time of purchase will apply to the purchase of this product.
Availability: Not Available - stock arriving soon
Buy Now from Amazon
Product Information (more info)
CERTAIN CONTENT THAT APPEARS ON THIS SITE COMES FROM AMAZON SERVICES LLC. THIS CONTENT IS PROVIDED 'AS IS' AND IS SUBJECT TO CHANGE OR REMOVAL AT ANY TIME.

Nominated for seven Academy Awards including Best Picture and based on the best-selling autobiography, Coal Miner’s Daughter is the amazing true story of the legendary country star, Loretta Lynn. In the acclaimed performance that earned her the Academy Award for Best Actress, Sissy Spacek stars as the poor Appalachian Mountains mother who rose from humble beginnings to become the "Queen of Country Music." Co-starring Tommy Lee Jones as her ambitious husband who recognizes her talent and prods her into making a record, Coal Miner’s Daughter is a remarkable tale of a woman's triumph in making her name in the world.