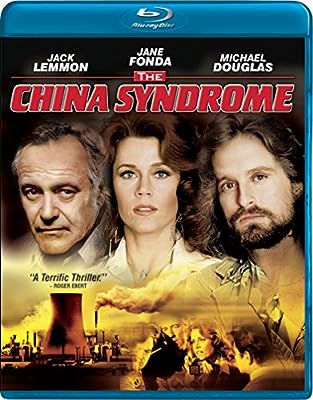 Price: $17.97
As of 2022-11-30 10:14:20 UTC (more info)
Product prices and availability are accurate as of 2022-11-30 10:14:20 UTC and are subject to change. Any price and availability information displayed on http://www.amazon.com/ at the time of purchase will apply to the purchase of this product.
Availability: Not Available - stock arriving soon
Buy Now from Amazon
Product Information (more info)
CERTAIN CONTENT THAT APPEARS ON THIS SITE COMES FROM AMAZON SERVICES LLC. THIS CONTENT IS PROVIDED 'AS IS' AND IS SUBJECT TO CHANGE OR REMOVAL AT ANY TIME.

Nominated for four Academy Awards® including Best Actor and Actress (Jack Lemmon, Best Actor; Jane Fonda, Best Actress–1979), THE CHINA SYNDROME stars Jane Fonda, Jack Lemmon and Michael Douglas in the "superbly suspenseful, expertly crafted, entirely riveting" (Richard Schickel, Time) white-knuckle thriller that famously predicted Three Mile Island meltdown, a nuclear disaster that occurred just 12 days after the film's theatrical release. It started as just another assignment. Reporter Kimberly Wells (Jand Fonda) and cameraman Richard Adams (Michael Douglas) were covering the daily routine at a Los Angeles power plant when the unthinkable occurred – a nuclear accident that could have wiped out Southern California. And Richard caught it all on tape. When their TV station refuses to air the footage, Wells and Adams recruit plant supervisor Jack Godell (Jack Lemmon) to expose the terrifying truth: the facility is a ticking time bomb. But with millions of dollars at stake, company officials cannot let the story break. When the trio attempts to broadcast live from the plant's control room, the utility company does everything in its power to silence Godell permanently, as the world watches.