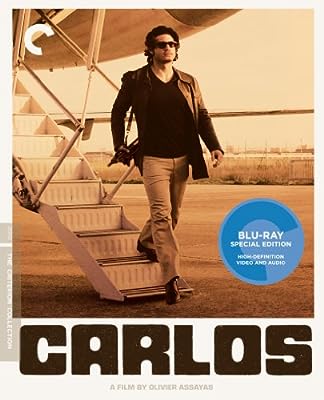 Price: $49.95
As of 2022-10-03 08:46:04 UTC (more info)
Product prices and availability are accurate as of 2022-10-03 08:46:04 UTC and are subject to change. Any price and availability information displayed on http://www.amazon.com/ at the time of purchase will apply to the purchase of this product.
Availability: Not Available - stock arriving soon
Buy Now from Amazon
Product Information (more info)
CERTAIN CONTENT THAT APPEARS ON THIS SITE COMES FROM AMAZON SERVICES LLC. THIS CONTENT IS PROVIDED 'AS IS' AND IS SUBJECT TO CHANGE OR REMOVAL AT ANY TIME.

Carlos, directed by Olivier Assayas (Summer Hours), is an epic, intensely detailed account of the life of the infamous international terrorist Ilich Ramírez Sanchez—also known as Carlos the Jackal. One of the twentieth century’s most-wanted fugitives, Carlos was committed to violent left-wing activism throughout the seventies and eighties, orchestrating bombings, kidnappings, and hijackings in Europe and the Middle East. Assayas portrays him not as a criminal mastermind but as a symbol of seismic political shifts around the world, and the magnetic Édgar Ramírez (The Bourne Ultimatum) brilliantly embodies him as a swaggering global gangster. Criterion presents the complete, uncut, director-approved, five-and-a-half-hour version of Carlos.