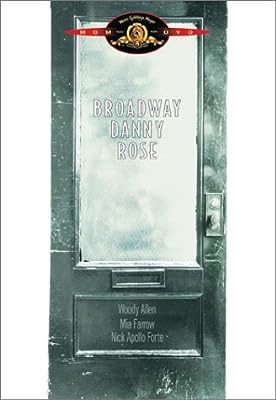 Price: $9.75
As of 2022-10-07 13:10:11 UTC (more info)
Product prices and availability are accurate as of 2022-10-07 13:10:11 UTC and are subject to change. Any price and availability information displayed on http://www.amazon.com/ at the time of purchase will apply to the purchase of this product.
Availability: Not Available - stock arriving soon
Buy Now from Amazon
Product Information (more info)
CERTAIN CONTENT THAT APPEARS ON THIS SITE COMES FROM AMAZON SERVICES LLC. THIS CONTENT IS PROVIDED 'AS IS' AND IS SUBJECT TO CHANGE OR REMOVAL AT ANY TIME.

A Broadway agent/comic gets into trouble with the Mafia while he is trying to get his client's career back on track.
Genre: Feature Film-Comedy
Rating: PG
Release Date: 7-SEP-2004
Media Type: DVD

Often overlooked, Broadway Danny Rose has developed a cult following among select Woody Allen fans; Chris Rock, of all people, says it's one of his favorite films. Allen plays a devoted talent agent for acts whose talent is, shall we say, marginal. But one of his clients, a faded singer named Lou Canova (Nick Apollo Forte), suddenly has a chance to perform for a record executive. Nervous, Canova insists that Rose bring his girlfriend to the show--unfortunately, his girlfriend is Tina Vitale (Mia Farrow), the wife of a big-time mobster. (Farrow's performance is superb and unlike anything else in her career: loud, brassy, and comically obnoxious.) Part caper, part-show biz satire, Broadway Danny Rose would make an excellent companion to Paper Moon; both are a delightful combination of nostalgia and cutting observations about human nature. --Bret Fetzer