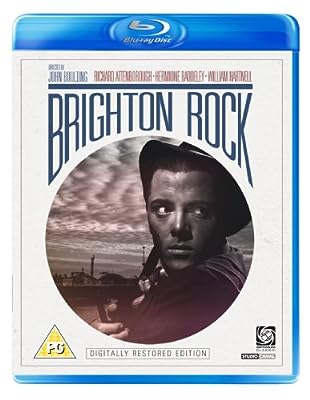 Price: $16.40
As of 2023-02-06 05:07:06 UTC (more info)
Product prices and availability are accurate as of 2023-02-06 05:07:06 UTC and are subject to change. Any price and availability information displayed on http://www.amazon.com/ at the time of purchase will apply to the purchase of this product.
Availability: Not Available - stock arriving soon
Buy Now from Amazon
Product Information (more info)
CERTAIN CONTENT THAT APPEARS ON THIS SITE COMES FROM AMAZON SERVICES LLC. THIS CONTENT IS PROVIDED 'AS IS' AND IS SUBJECT TO CHANGE OR REMOVAL AT ANY TIME.

Roy Boulton directs this classic adaptation of the Graham Greene novel detailing the activities of a group of thugs in 1930s Brighton. Pinkie Brown (Richard Attenborough) is the head of a gang of small time crooks who make their money from a protection racket centred around Brighton race course. Pinkie is known for his short fuse and brutality, so his murder of a rival, Fred (Alan Wheatley), is very much in character. Pinkie believes, nonetheless, that he has got away with the crime until the promptings of a suspicious local woman, Ida (Hermione Baddeley), threaten to have the case reopened. Since only one person can identify him as the murderer, the waitress, Rose Brown (Carol Marsh), Pinkie comes up with an ingenious solution - marry Rose to stop her testifying against him. But will things go to plan?

By Brakhage: An Anthology, Volumes One a...