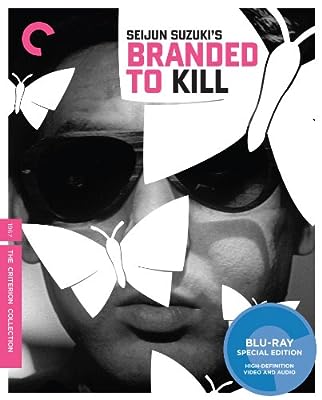 Price: $24.02
As of 2023-02-05 02:28:37 UTC (more info)
Product prices and availability are accurate as of 2023-02-05 02:28:37 UTC and are subject to change. Any price and availability information displayed on http://www.amazon.com/ at the time of purchase will apply to the purchase of this product.
Availability: Not Available - stock arriving soon
Buy Now from Amazon
Product Information (more info)
CERTAIN CONTENT THAT APPEARS ON THIS SITE COMES FROM AMAZON SERVICES LLC. THIS CONTENT IS PROVIDED 'AS IS' AND IS SUBJECT TO CHANGE OR REMOVAL AT ANY TIME.

When Japanese New Wave bad boy Seijun Suzuki (Tokyo Drifter) delivered this brutal, hilarious, and visually inspired masterpiece to the executives at his studio, he was promptly fired. Branded To Kill tells the ecstatically bent story of a yakuza assassin (Joe Shishido, the chipmunk-cheeked superstar from Gate of Flesh) with a fetish for sniffing boiled rice who botches a job and ends up a target himself. This is Suzuki at his most extreme—the flabbergasting pinnacle of his sixties pop-art aesthetic.