Brand Upon the Brain! (The Criterion Collection) 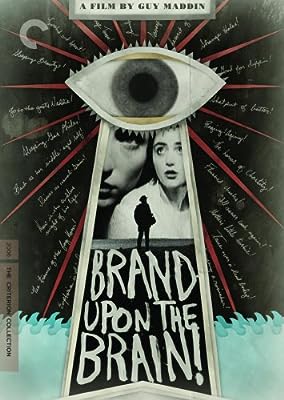 Price: $29.99
As of 2022-11-29 11:54:38 UTC (more info)
Product prices and availability are accurate as of 2022-11-29 11:54:38 UTC and are subject to change. Any price and availability information displayed on http://www.amazon.com/ at the time of purchase will apply to the purchase of this product.
Availability: Not Available - stock arriving soon
Buy Now from Amazon
Product Information (more info)
CERTAIN CONTENT THAT APPEARS ON THIS SITE COMES FROM AMAZON SERVICES LLC. THIS CONTENT IS PROVIDED 'AS IS' AND IS SUBJECT TO CHANGE OR REMOVAL AT ANY TIME.

In the weird and wonderful super-cinematic world of Canadian cult filmmaker Guy Maddin, personal memory collides with movie lore for a radical sensory overload. This eerie excursion into the gothic recesses of Maddin s mad, imaginary childhood is a silent, black-and-white comic science-fiction nightmare set in a lighthouse on grim Notch Island, where fictional protagonist Guy Maddin was raised by an ironfisted, puritanical mother. Originally mounted as a theatrical event (accompanied by live orchestra, foley artists, and assorted narrators), Brand upon the Brain! is an irreverent, delirious trip into the mind of one of current cinema s true eccentrics.

Guy Maddin’s feature, Brand Upon the Brain, may well be his best. Maddin buffs will be reminded of Tales of Gimli Hospital, due to its horrific, slanted comedy, yet this film delves poetically into this auteur’s autobiography. Brand Upon the Brain is constructed in black and white with Maddin’s unique blend of old-fashioned and modernist filmic styles and techniques, yet what is most wonderful is the plot’s melding of fantasy and reality. Broken up into sections marked by title cards recalling silent films, the film takes place on a Canadian island called Black Notch, where protagonist, Guy (Erik Steffan Maahs as old Maddin, Sullivan Brown as boy Maddin), is raised under the thumb of his controlling mother (Gretchen Krich) who is managing an orphanage. Unfolding in chapters such as "Memory Floods Back," "Background," and "Dark Schedules," Brand Upon the Brain tackles issues of homosexual awakening in a pious environment, cross-dressing, sibling rivalry, youthful lust, escapism’s role in the development of artistic imagination, plus many darker topics that will thrill viewers ready for the macabre. In Chapter Six, garments are fetishistically removed with "Undressing Gloves", linking childhood play and adult desire. Maddin’s childhood acquaintances, like bully Savage Tom (Andrew Loviska), and crush Wendy Hale who morphs into a boy called Chance with a simple haircut (Katherine Scharhon) underscore the director’s love of carnivalesque characters. Smears of Vaseline on the camera lens, quavering shots that look hand-rendered, quick-cut editing, and sets alongside costuming lend the film an over-the-top nostalgia that borders on camp. This adds to the absurdist tale an historicism that convinces the viewer of this story’s truth, though it is clearly fictionalized. In fact, the extras contain a mini-documentary interview with Maddin, in which he describes the roughly two-percent of the film that actually occurred. Also notable is the audio format experimentation. Having once toured live as a silent film narrated by various artists in person, the DVD contains narration from Maddin’s point of view in several different voices, such as Isabella Rossellini, Laurie Anderson, and John Ashbery. One can select whose voice they want to serve as Maddin’s stand-in, which is jarringly strange. The short films, "It’s My Mother’s Birthday Today," and "Footsteps," about the sound effects company who contribute greatly to the hazy, atmospherics, are also excellent. It is so lovely to see such an individualist gain recognition through Criterion Collection, as this will hopefully expose more viewers to this stridently independent artist. —Trinie Dalton