Blast of Silence (The Criterion Collection) 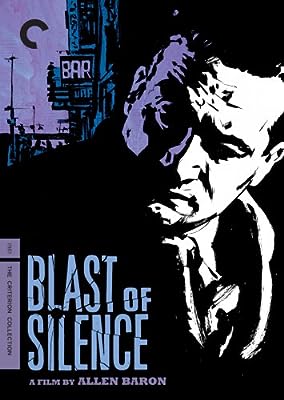 Price:
As of 2022-12-09 13:44:41 UTC (more info)
Product prices and availability are accurate as of 2022-12-09 13:44:41 UTC and are subject to change. Any price and availability information displayed on http://www.amazon.com/ at the time of purchase will apply to the purchase of this product.
Availability: Not Available - stock arriving soon
Buy Now from Amazon
Product Information (more info)
CERTAIN CONTENT THAT APPEARS ON THIS SITE COMES FROM AMAZON SERVICES LLC. THIS CONTENT IS PROVIDED 'AS IS' AND IS SUBJECT TO CHANGE OR REMOVAL AT ANY TIME.

Swift, brutal, and black-hearted, Allen Baron s New York City noir Blast of Silence is a sensational surprise. This low-budget, carefully crafted portrait of a hit man on assignment in Manhattan during Christmastime follows its stripped-down narrative with mechanical precision, yet also with an eye and ear for the oddball idiosyncrasies of urban living and the imposing beauty of the city s locations. At once visually ragged and artfully composed, and featuring rough, poetic narration by Lionel Stander, Blast of Silence is a stylish triumph.

Requiem for a Killer: The Making of Blast of Silence (2007)

PLUS: An essay by film critic Terrence Rafferty and a four-page graphic-novel adaptation of the film by award-winning artist Sean Phillips

Somewhere between film noir and The Sopranos lies Blast of Silence, a concise, compelling psychological portrait of a low-level hit-man, shot in 1961 on a shoestring budget with New York City grit. This is the sort of movie, unique but out of sync with its time, that Criterion practically exists to rescue. Accompanied by an avant-jazz soundtrack and hard-boiled Beat narration from the gloriously gravel-voiced Lionel Stander, the blue-collar assassin wanders through the city at Christmastime, revolted by human contact but sucker enough to think a girl he once knew might redeem him. Writer/director Allen Baron stepped into the lead role when he lost Peter Falk; while he's certainly not as expressive an actor, his face has an uncomfortable mixture of yearning and defensiveness that suits the character to a T. Stylishly framed images and sharp, staccato editing, combined with the almost documentary feel of the performances and settings, wrap the entire movie in an alienated tension. This being a Criterion release, it's got fantastic extras: A relaxed interview with the chatty, garrulous Baron, which is combined with a short documentary from 1990 in which Baron went back to all the locations used in Blast of Silence and reminisced; Polaroid photos from the set that look like lost Weegee photographs; a loving essay by critic Terrence Rafferty; and more. But the movie doesn't need any of this to make its mark--it's an American classic, as crucial to the launch of independent film as Cassavetes. Highly recommended. --Bret Fetzer