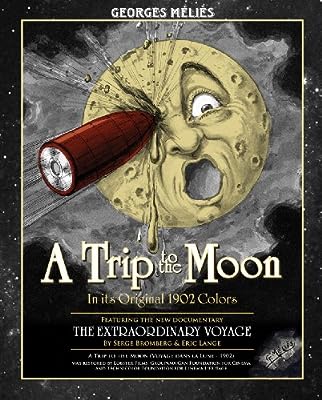 Price: $49.98
As of 2022-12-07 00:27:51 UTC (more info)
Product prices and availability are accurate as of 2022-12-07 00:27:51 UTC and are subject to change. Any price and availability information displayed on http://www.amazon.com/ at the time of purchase will apply to the purchase of this product.
Availability: Not Available - stock arriving soon
Buy Now from Amazon
Product Information (more info)
CERTAIN CONTENT THAT APPEARS ON THIS SITE COMES FROM AMAZON SERVICES LLC. THIS CONTENT IS PROVIDED 'AS IS' AND IS SUBJECT TO CHANGE OR REMOVAL AT ANY TIME.

A Trip to the Moon (or Voyage to the Moon) is a 1902 French science fiction short and is loosely based on two huge popular books of that era which were H. G. Well's The First Men in the Moon and From the Earth to the Moon by Jules Verne. The film was written and directed by Georges Melies and assisted by his brother Gaston. Melies was a former magician and showman who is known mostly for directing over a hundred fantasy films using astonishing stunts and special effects for its time, which included several groundbreaking tricks with the camera.

The original hand-painted color version of Georges M‚liŠs' masterpiece, A Trip to the Moon (1902), to home video 110 years after its first release. Georges M‚liŠs, one of the celebrated heroes of Martin Scorsese's new movie Hugo, was a master of cinematic invention and enchantment. A Trip to the Moon also features The Extraordinary Voyage, a fascinating documentary directed by Serge Bromberg and Eric Lange about the life of Georges M‚liŠs and the magic of film history and preservation. The material for A Trip to the Moon (1902) is sourced from a restored color version that had been considered lost for several decades and is presented with an original soundtrack by the French band, AIR. The Extraordinary Voyage (2011) chronicles the journey of A Trip to the Moon from the fantastical M‚liŠs' production in 1902 to the astonishing rediscovery of a nitrate print in color in 1993, to the premiere of the new restoration on the opening night of the Cannes Film Festival in 2011.

While A Trip to the Moon was still hugely successful, Méliès eventually went bankrupt. This was due in part to the eventual view which was held towards his films that the special effects were overshadowing the plot. In an interview on the newly restored blue ray of the film legendary director Martin Scoresese states, “Georges Méliès lost basically most of his financing when the bigger companies came in. What happened here, at that time there was a lot going on with copyright and not copyright and that sort of thing." A Trip to the Moon is the very first known science fiction film, and it used groundbreaking and innovative technology, animation and special effects, including the iconic image of a spaceship landing in the Moon's eye. Georges Melies was a talent of the imagination and of special effects and learned many creative new tricks that were never achieved before with the movie-camera.

The Phantom Carriage (The Criterion Coll...