A Star Is Born (Deluxe Edition) 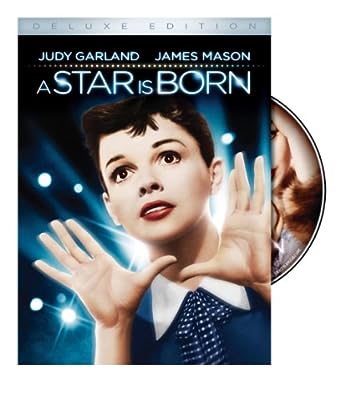 Price: $19.98
As of 2023-02-05 16:50:58 UTC (more info)
Product prices and availability are accurate as of 2023-02-05 16:50:58 UTC and are subject to change. Any price and availability information displayed on http://www.amazon.com/ at the time of purchase will apply to the purchase of this product.
Availability: Not Available - stock arriving soon
Buy Now from Amazon
Product Information (more info)
CERTAIN CONTENT THAT APPEARS ON THIS SITE COMES FROM AMAZON SERVICES LLC. THIS CONTENT IS PROVIDED 'AS IS' AND IS SUBJECT TO CHANGE OR REMOVAL AT ANY TIME.

Judy Garland had no better showcase of her formidable singing and acting talent than as the title "star" of this moving, memorable classic directed by George Cukor. As a band singer discovered and guided to heights of show-business success by an alcoholic ex-matinee idol (James Mason), she performs one superb song after another (most by Harold Arlen and Ira Gershwin) in a production that exhilarates with its craft and style even as its story moves toward a heartbreaking finale. Shortened after its 1954 premiere and reconstructed to near its original length in 1983, A Star Is Born endures as one of Hollywood’s supreme triumphs.