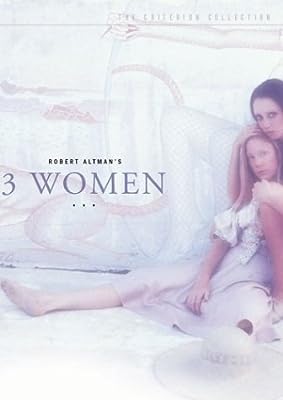 Price: $29.54
As of 2022-10-04 20:42:08 UTC (more info)
Product prices and availability are accurate as of 2022-10-04 20:42:08 UTC and are subject to change. Any price and availability information displayed on http://www.amazon.com/ at the time of purchase will apply to the purchase of this product.
Availability: Not Available - stock arriving soon
Buy Now from Amazon
Product Information (more info)
CERTAIN CONTENT THAT APPEARS ON THIS SITE COMES FROM AMAZON SERVICES LLC. THIS CONTENT IS PROVIDED 'AS IS' AND IS SUBJECT TO CHANGE OR REMOVAL AT ANY TIME.

In a dusty, under-populated California resort town, Pinky Rose (Sissy Spacek), a naive and impressionable Southern waif begins her life as a nursing home attendant. There, Pinky finds her role model in fellow nurse "Thoroughly Modern" Millie Lammoreaux (Shelley Duvall), a misguided would-be sophisticate and hopeless devotee of Cosmopolitan and Woman's Day magazines. When Millie accepts Pinky into her home at the Purple Sage singles' complex, Pinky's hero-worship evolves into something far stranger and more sinister than either could have anticipated. Featuring brilliant performances from Spacek and Duvall, Robert Altman's dreamlike masterpiece, 3 Women, careens from the humorous to the chilling to the surreal, resulting in one of the most unusual and compelling films of the 1970s.

"The cinema," Orson Welles famously noted, "is a ribbon of dream." 3 Women is one of few feature films on record as having taken form in a dream. The dreamer was Robert Altman, and although all his best work has an oneiric quality--the floaty zooms, the eerie pastels bleeding into one another, the slip and slide of characters' trajectories overlapping in the fluid accumulation of what passes for narrative--this last masterpiece in his amazing seven-year run of 1970s masterpieces is only more so. Shelly Duvall, that most unorthodox of Altman creatures, locks in the tone with her eerie portrayal of Millie Lammoreaux, a Texan hoyden whose nonstop prattle turns life into a stream-of-consciousness reverie even as most of the people in her vicinity studiously ignore her. Her primacy is worshiped, then emulated by a strange, certifiably dysfunctional childwoman named Pinky Rose (Sissy Spacek) who comes to work in the same old-age home as Millie, moves in with her, and progressively usurps her lifestyle and finally her identity. The third woman, Willie (the late Janice Rule), is a pregnant artist who paints reptilian humanoid figures on the floors of swimming pools. Willie's husband (Robert Fortier), a strutting gun nut who once had a bit part on TV's Wyatt Earp ("He knows Hugh O'Brian"), is just about the only male character of consequence in the film. This macho man gets his--but what "his" may be is only one of the movie's beguiling mysteries. It's only appropriate that the cameraman, Chuck Rosher, should be the son of the man who photographed F.W. Murnau's Sunrise. --Richard T. Jameson