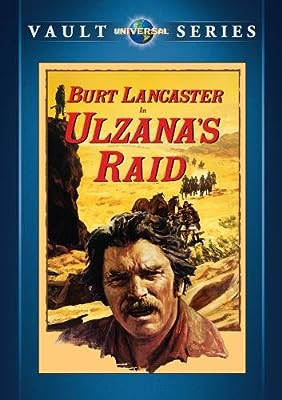 Price: $19.98
As of 2023-02-06 06:11:13 UTC (more info)
Product prices and availability are accurate as of 2023-02-06 06:11:13 UTC and are subject to change. Any price and availability information displayed on http://www.amazon.com/ at the time of purchase will apply to the purchase of this product.
Availability: Not Available - stock arriving soon
Buy Now from Amazon
Product Information (more info)
CERTAIN CONTENT THAT APPEARS ON THIS SITE COMES FROM AMAZON SERVICES LLC. THIS CONTENT IS PROVIDED 'AS IS' AND IS SUBJECT TO CHANGE OR REMOVAL AT ANY TIME.

Burt Lancaster (Airport) stars as a scout assigned to aid the cavalry in tracking down Ulzana and his band of renegade Indians in the fact-based story Ulzana's Raid. As the trail gets hotter, McIntosh (Lancaster) attempts to teach an idealistic young lieutenant (Bruce Davison) that the only way to fight the Apaches' escalating brutality and violence is with even stronger force. Directed by Robert Aldrich (The Dirty Dozen), this gritty action epic is sure to excite both the senses and the intellect.