Under the Volcano (The Criterion Collection) 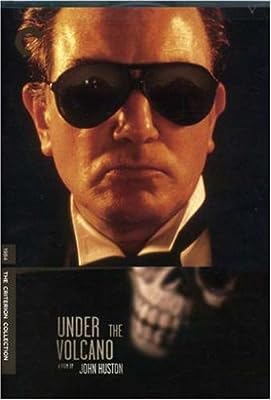 Price: $29.99
As of 2023-01-31 22:17:10 UTC (more info)
Product prices and availability are accurate as of 2023-01-31 22:17:10 UTC and are subject to change. Any price and availability information displayed on http://www.amazon.com/ at the time of purchase will apply to the purchase of this product.
Availability: Not Available - stock arriving soon
Buy Now from Amazon
Product Information (more info)
CERTAIN CONTENT THAT APPEARS ON THIS SITE COMES FROM AMAZON SERVICES LLC. THIS CONTENT IS PROVIDED 'AS IS' AND IS SUBJECT TO CHANGE OR REMOVAL AT ANY TIME.

Under the Volcano follows the final day in the life of self-destructive British consul Geoffrey Firmin (Albert Finney; in an Oscar-nominated tour de force)on the eve of World War II. Withering from alcoholism; Firmin stumbles through a small Mexican village amidst the Day of the Dead fiesta; attmepting to reconnect with his estranged wife (Jacqueline Bisset) but only further alienating himself. John Huston's ambitious tackling of Malcom Lowry's towering "unadaptable" novel gave the incomparable Finney one of his grandest roles and was the legendary The Treasure of Sierra Madre director's triumphant return to filmmaking in Mexico.

The Criterion Collection release of Under The Volcano reaffirms director John Huston's affinity for tragedies starring outcasts and wayward souls (see also The Misfits and Night of the Iguana). Adapted from Malcolm Lowry's novel set in Cuernavaca, Mexico, 1938, on the eve of WW II, Under The Volcano recounts the tragic life of British Consul Geoffrey Firmin's (Albert Finney) final struggles with alcoholism during Day of the Dead, as his estranged wife, Yvonne (Jaqueline Bisset) returns from New York to patch up their marriage and to encourage his sobering up. From the opening scene, Firmin is relentlessly drunk, mumbling Shakespearean-like rants with a dark sense of humor about the horrors of war and the perils of love. Finney's stunning performance recalls the best of Richard Burton (Who's Afraid of Virginia Woolf?), who was originally offered the role. Fortunately for the viewer, Finney was cast, as his compellingly dour portrayal of Firmin is undeniably masterful. Set in bars, restaurants, and amongst the plaza's Dia de los Muertos festivities featuring devils and skeletons alongside garlands and balloons, Under The Volcano's visual splendor underscores the decadence of Finney's drinking habit. There is not a single shot missing a bottle of liquor, and as Finney's health deteriorates the weather in the film subtly mimics his psychological state. The film is as wondrous as it is devastating. Included as extras on this DVD are the Richard Burton-narrated "Volcano: An Inquiry into the Life of Malcolm Lowry," a captivating documentary about the author's life, and an hour-long documentary about the making of the film. --Trinie Dalton