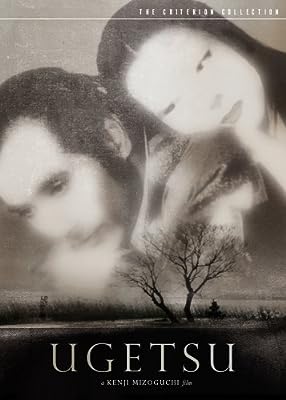 Price: $29.27
As of 2023-02-02 14:23:24 UTC (more info)
Product prices and availability are accurate as of 2023-02-02 14:23:24 UTC and are subject to change. Any price and availability information displayed on http://www.amazon.com/ at the time of purchase will apply to the purchase of this product.
Availability: Not Available - stock arriving soon
Buy Now from Amazon
Product Information (more info)
CERTAIN CONTENT THAT APPEARS ON THIS SITE COMES FROM AMAZON SERVICES LLC. THIS CONTENT IS PROVIDED 'AS IS' AND IS SUBJECT TO CHANGE OR REMOVAL AT ANY TIME.

Legendary Japanese director Kenji Mitzoguchi's masterpiece Ugetsuis the greatest of all ghost stories and is a cautionary tale on two characters who are consumed by greed and envy. At a violent time of war these two selfish individuals will risk their families lives to pursue their obsessions and ambitions. The films mysterious tone and elegant feel doesn't try to hide the fact that it is a ghost story and one of the two ghosts that appear in the film is rather quite obvious. The second one isn't quite so obvious and yet when it is discovered it brings a tragic and profound haunting power to the story. Kenji Mizoguchi is an extraordinary filmmaker who was loved by the French critics of Cahiers du cinema, describing Mitzoguchi as not only the greatest of Japanese masters but high in the ranks of the greatest filmmakers who have ever practiced the art.

Two 16th-century Japanese men leave their families: one for a phantom princess, the other to be a samurai. Directed by Kenji Mizoguchi.

Hailed by critics as one of the greatest films ever made, Kenji Mizoguchi's Ugetsu is an undisputed masterpiece of Japanese cinema, revealing greater depths of meaning and emotion with each successive viewing. Mizoguchi's exquisite "gender tragedy" is set during Japan's violent 16th-century civil wars, a historical context well-suited to the director's compassionate perspective on the plight of women and the foibles of men. The story focuses on two brothers, Genjuro (Masayuki Mori) and Tobei (Sakae Ozawa), whose dreams of glory (one as a wealthy potter, the other a would-be samurai) cause them to leave their wives for the promise of success in Kyoto. Both are led astray by their blind ambitions, and their wives suffer tragic fates in their absence, as Ugetsu evolves into a masterful mixture of brutal wartime realism and haunting ghost story. The way Mizoguchi weaves these elements so seamlessly together is what makes Ugetsu (masterfully derived from short stories by Akinari Ueda and Guy de Maupassant) so challenging and yet deeply rewarding as a timeless work of art. Featuring flawless performances by some of Japan's greatest actors (including Machiko Kyo, from Kurosawa's Rashomon), Ugetsu is essential viewing for any serious lover of film. --Jeff Shannon

DVD features
The Criterion Collection's high standards of scholarly excellence are on full display in the two-disc set of Ugetsu, packaged in an elegant slipcase reflecting the tonal beauty of the film itself, which has been fully restored with a high-definition digital transfer. The well-prepared commentary by critic/filmmaker Tony Rayns combines the astute observations of a serious cineaste (emphasizing a keen appreciation for Mizoguchi's long-take style, compositional meaning, and literary inspirations) with informative biographical and historical detail. In the 14-minute featurette "Two Worlds Intertwined," director Masahiro Shinoda discusses how Mizoguchi's career and films have had a lasting impact on himself and Japanese culture in general. Interviews with Tokuzo Tanaka (first assistant director on Ugetsu) and cinematographer Kazuo Miyagawa focus more specifically on anecdotal production history Mizoguchi's working methods, including the director's legendary perfectionism regarding painstaking details of props, costumes, and production design.

Disc 2 consists entirely of Kenji Mizoguchi: The Life of a Film Director, a 150-minute documentary from 1975. Though it occasionally gets bogged down in biographical minutia, the film provides a thoroughly comprehensive survey of Mizoguchi's career, including interviews with nearly all of Mizoguchi's primary collaborators. Director/interviewer Kaneto Shindo ultimately arrives at an emotionally devastating coup de grace when he informs the great actress Kinuyo Tanaka (star of The Life of Oharu and other Mizoguchi classics) that Mizoguchi had considered her "the love of his life." Tanaka's graceful response provides a moving appreciation of their artistic bond, which never evolved into romance. As we learn, the tragic irony of Mizoguchi's life is that he died in sadness and suffering, in 1956, just as he was entering a more hopeful and artistically revitalized period of middle age. After showing us all the locations that were important in Mizoguchi's life, the film closes with a blunt discovery of life's ethereal nature: The great director's final home was torn down and replaced with a gas station. The 72-page booklet that accompanies Ugestu contains a well-written appreciation of the film by critic Phillip Lopate. Also included are the three short stories that inspired Ugetsu, allowing readers to see how Mizoguchi and screenwriter Yoshikata Yoda masterfully combined elements of these unrelated stories to create one of the enduring classics of Japanese cinema. --Jeff Shannon

Mitzoguchi was famous for the 'one scene, one shot,' technique. His style avoids close-ups and instead links the characters to their environment which creates tension and psychological density. Consider a scene in Ugetsu where Lady Wakasa visits Genjuro as he is bathing in an outdoor pool, and as she enters the pool to join him, water splashes over the side and the camera follows the splash into a pan across rippling water that ends with the two of them having a picnic on the grass. Yasujiro Ozu had a similar technique in his films but the difference with Ozu was that he never moved his camera, unlike Mizoguchi which was a more fluid poetic style. Like all the great masters Mizoguchi had his own personal themes that he relished on in each film he made. His themes mostly focused on poverty, obsession of becoming wealthy and a women’s place in Japanese society.