The Treasure of the Sierra Madre [Blu-ray] 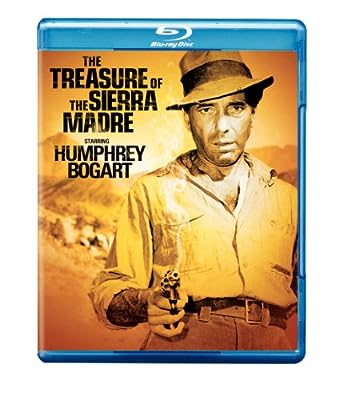 Price: $19.98
As of 2021-09-26 19:38:01 UTC (more info)
Product prices and availability are accurate as of 2021-09-26 19:38:01 UTC and are subject to change. Any price and availability information displayed on http://www.amazon.com/ at the time of purchase will apply to the purchase of this product.
Availability: Not Available - stock arriving soon
Buy Now from Amazon
Product Information (more info)
CERTAIN CONTENT THAT APPEARS ON THIS SITE COMES FROM AMAZON SERVICES LLC. THIS CONTENT IS PROVIDED 'AS IS' AND IS SUBJECT TO CHANGE OR REMOVAL AT ANY TIME.

Gold in the hills, avarice in the hearts of men. Two hard-luck drifters (Humphrey Bogart and Tim Holt) and a grizzled prospector (Walter Huston) discover gold. Then greed and paranoia set in. John Huston won Academy Awards for his direction and screenplay. And his dad took the Best Supporting Actor Oscar. Without awards, but with enduring acclaim, is Bogart's performance, transforming from a likable hobo to a heartless thug simmering in greed. Treasures place on the American Film Institute’s Top 100 American Films list reaffirms it's still a powerful movie.