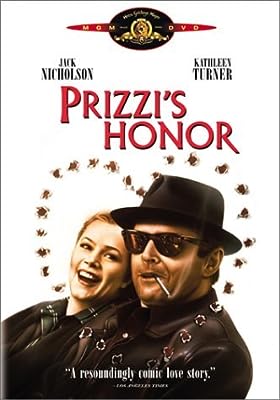 Price: $14.98
As of 2023-02-06 03:24:46 UTC (more info)
Product prices and availability are accurate as of 2023-02-06 03:24:46 UTC and are subject to change. Any price and availability information displayed on http://www.amazon.com/ at the time of purchase will apply to the purchase of this product.
Availability: Not Available - stock arriving soon
Buy Now from Amazon
Product Information (more info)
CERTAIN CONTENT THAT APPEARS ON THIS SITE COMES FROM AMAZON SERVICES LLC. THIS CONTENT IS PROVIDED 'AS IS' AND IS SUBJECT TO CHANGE OR REMOVAL AT ANY TIME.

Get ready for a mob hit that's as "funny as hell" (L.A. Weekly), when legendary director John Huston takes aim at family values in "one of his very best films" (Roger Ebert)! With "a superb cast" (Boxoffice) led by Jack Nicholson and Kathleen Turner, this killer comedy scored eight Academy AwardÂ(r) nominations,* including Best Picture, and an OscarÂ(r) for Anjelica Huston. The Prizzi family's principal hit man, Charley (Nicholson), is about to discover that he and his new bride (Turner) share more than just body heat: They're both cold-blooded assassins, and their next job is to ice each other! Now Charley must choose which contract to honorthe oneto his wife or the one on his wifein this "wickedly amoral black comedy" (Screen International)! *1985: Actor (Nicholson), Supporting Actor (William Hickey), Director, Adapted Screenplay, Editing, Costume Design