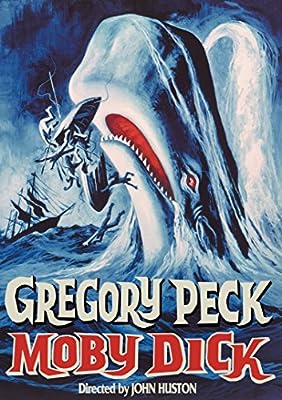 Price: $13.76
As of 2021-09-23 18:48:07 UTC (more info)
Product prices and availability are accurate as of 2021-09-23 18:48:07 UTC and are subject to change. Any price and availability information displayed on http://www.amazon.com/ at the time of purchase will apply to the purchase of this product.
Availability: Not Available - stock arriving soon
Buy Now from Amazon
Product Information (more info)
CERTAIN CONTENT THAT APPEARS ON THIS SITE COMES FROM AMAZON SERVICES LLC. THIS CONTENT IS PROVIDED 'AS IS' AND IS SUBJECT TO CHANGE OR REMOVAL AT ANY TIME.

Mastered in HD! (One of the great motion pictures of our time!) The New York Times - This spectacular retelling of Herman Melville s classic, masterfully directed by John Huston (The Unforgiven), is unsurpassed in entertainment, imagination and high adventure. From the screenplay by Ray Bradbury (Fahrenheit 451) and Huston, Moby Dick is a brilliant film - consumed by an insane rage, Captain Ahab (Gregory Peck, On the Beach) has but one purpose in life - revenge on Moby Dick, the great white whale who maimed and disfigured him. The obsessed skipper of a whaling boat, Ahab uses his command as an excuse to sail the seven seas in an unrelenting search of his prey while battling a mutinous crew, tropical heat and violent storms in this epic struggle of non-stop fury and inevitable doom. The amazing cast includes Richard Basehart, Leo Genn, Harry Andrews, Bernard Miles, Royal Dano and the great Orson Welles.
Special Features: Trailers for On the Beach, Billy Two Hats, Moby Dick and The Unforgiven