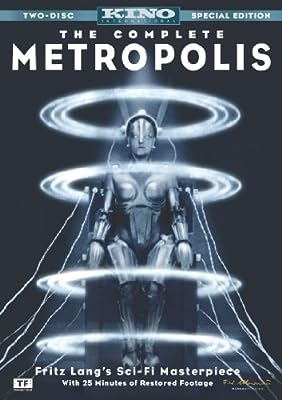 Price: $17.38
As of 2022-08-13 07:36:15 UTC (more info)
Product prices and availability are accurate as of 2022-08-13 07:36:15 UTC and are subject to change. Any price and availability information displayed on http://www.amazon.com/ at the time of purchase will apply to the purchase of this product.
Availability: Not Available - stock arriving soon
Buy Now from Amazon
Product Information (more info)
CERTAIN CONTENT THAT APPEARS ON THIS SITE COMES FROM AMAZON SERVICES LLC. THIS CONTENT IS PROVIDED 'AS IS' AND IS SUBJECT TO CHANGE OR REMOVAL AT ANY TIME.

Metropolis takes place in the year 2026, when the populace is divided between workers, who must live in the dark underground, and the rich who enjoy a futuristic city of splendor. The tense balance of these two societies is realized through images that are among the most famous of the 20th century, many of which presage such sci-fi landmarks as 2001: A Space Odyssey and Blade Runner. Lavish and spectacular, with elaborate sets, heart-pounding action and modern science fiction style, Metropolis stands today as the crowning achievement of classic science fiction cinema. Kino International is proud to announce this 2-Disc Special Edition set of the new restoration of Fritz Lang's 1927 science fiction masterpiece METROPOLIS, now with 25 minutes of lost footage and the original Gottfried Huppertz score. DVD SPECIAL FEATURES INCLUDE:
- Original 1927 score by Gottfried Huppertz, performed by the Rundfunk Symphony Orchestra, Berlin, conducted by Frank Strobel presented in 5.1 Dolby Digital Surround
- Limited Edition Collectible O-Card Packaging
- Voyage to Metropolis, a 50-minute documentary on the making and restoration of the film Interview with Paula Felix-Didier, curator of the Museo del Cine, Buenos Aires, where the missing footage was discovered
- 2010 re-release trailer