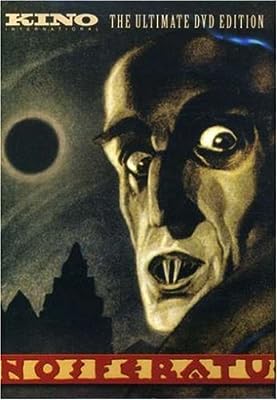 Price:
As of 2021-10-23 12:18:15 UTC (more info)
Product prices and availability are accurate as of 2021-10-23 12:18:15 UTC and are subject to change. Any price and availability information displayed on http://www.amazon.com/ at the time of purchase will apply to the purchase of this product.
Availability: Not Available - stock arriving soon
Buy Now from Amazon
Product Information (more info)
CERTAIN CONTENT THAT APPEARS ON THIS SITE COMES FROM AMAZON SERVICES LLC. THIS CONTENT IS PROVIDED 'AS IS' AND IS SUBJECT TO CHANGE OR REMOVAL AT ANY TIME.

A cornerstone of the horror film, F.W. Murnau s NOSFERATU is triumphantly reborn in this breathtaking new restoration by the F.W. Murnau Foundation. Backed by an orchestral performance of Hans Erdmann s 1922 score (recorded in 5.1 stereo surround), Kino International edition presents Murnau s masterpiece in this all-new restored HD transfer with unprecedented clarity and faithfulness to the original release version. This double-disc collection presents the film with the original German intertitles as well as with newly-translated English intertitles. Accompanying the film is a 52-minute documentary by Luciano Berriatúa which provides a detailed account of the production and explores the filmmakers involvement in the occult. Also includes 'Nosferatu: Historic Film Meets Digital Restoration' - a 3-minute documentary - Lengthy excerpts from other films by F.W. Murnau: Journey Into the Night (1920), The Haunted Castle (1921), Phantom (1922), The Finances of the Grand Duke (1924), The Last Laugh (1924), Tartuffe (1925), Faust (1926), and Tabu (1931) - Photo Gallery - Scene Comparison