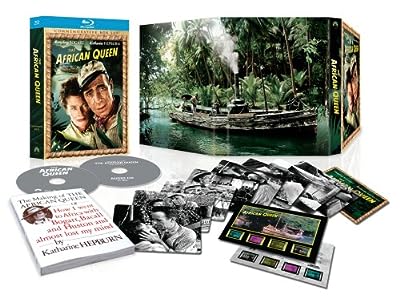 Price: $57.99
As of 2021-10-22 11:10:57 UTC (more info)
Product prices and availability are accurate as of 2021-10-22 11:10:57 UTC and are subject to change. Any price and availability information displayed on http://www.amazon.com/ at the time of purchase will apply to the purchase of this product.
Availability: Not Available - stock arriving soon
Buy Now from Amazon
Product Information (more info)
CERTAIN CONTENT THAT APPEARS ON THIS SITE COMES FROM AMAZON SERVICES LLC. THIS CONTENT IS PROVIDED 'AS IS' AND IS SUBJECT TO CHANGE OR REMOVAL AT ANY TIME.

At the start of World War 1, German imperial troops burn down Reverend Samuel Sayer's mission in Africa. He is overtaken with disappointment and passes away. Shortly after his well-educated, snooty sister Rose Sayer (Hepburn) buries her brother, she must leave on the only available transport, a tired river steamboat 'The African Queen' manned by the ill-mannered bachelor, Charlie Allnut (Bogart). Together they embark on a long difficult journey, without any comfort. Rose grows determined to assist in the British war effort and presses Charlie until he finally agrees and together they steam up the Ulana encountering an enemy fort, raging rapids, bloodthirsty parasites and endlessly branching stream which always seem to lead them to what appear to be impenetrable swamps. Despite opposing personalities, the two grow closer to each other and ultimately carry out their plan to take out a German warship. Includes the single DVD plus Reproduction of the book: The Making of African Queen: How I went to Africa with Bogey, Bacall and Huston and almost Lost My Mind" by Katharine Hepburn; SENITYPEr Film Frame Collectible Reproduction.